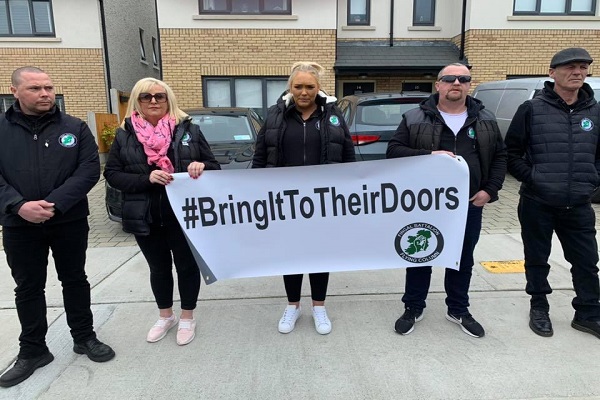 Another protest has taken place outside Health Minister, Simon Harris’ home. It’s understood that the Minister was in his house when the protest happened. The group, known as Fingal Battalion, carried out a similar protest in February.

The protestors shared a message online calling for Mr Harris’ resignation. The group wrote in the post via BN:

“Today we returned to failed health minister Simon Harris since last been here the health care in Ireland has been constantly in the headlines in the paper due to lack of facilities and the overwhelming cost of the new children’s hospital.”

“Simon also slated people who commemorated our fallen heroes but Simon needs to know he would never be commemorated in this country as he’s one of Ireland’s biggest embarrassments.”

The protesters were referencing a tweet that Mr Harris had posted where he criticised the marching of the Republican Sinn Féin by the GPO on O’Connell Street.

The march occurred just days after journalist Lyra McKee was had been murdered while reporting riots in Derry.

Only one army. Pretty simple and important concept in a democracy. Anything that endeavors to undermine that in any way cannot be tolerated. Pleased this will now be looked at. It needs to be. Really pathetic behaviour. Should be called out as such #NotInMyName https://t.co/s2iK7aD70c

Copper Face Jacks Is For Sale