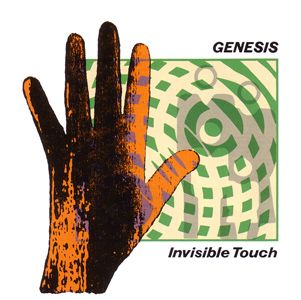 Invisible Touch is the thirteenth studio album by the band Genesis, released in 1986. It reached No.1 in the UK where it remained in the charts for 96 weeks, making it by far the most commercially successful album of their career, being certified 6x platinum in the US and 4x platinum in the UK. It eventually sold over 15 million copies worldwide. It received generally favourable reviews from critics and produced five US Top 5 singles, including the title track which reached the No.1 spot on the US chart, the only song by Genesis to do so.

A SACD and DVD double disc set (including new 5.1 and Stereo mixes) was released in October 2007.

During the writing process, “Invisible Touch”, produced through improvisation, became a standalone piece. It was originally conceived by Tony Banks as a part of the “Domino” suite.

Three songs were cut from the album and subsequently released as B-sides: “Feeding the Fire”, “I’d Rather Be You”, and “Do the Neurotic”. In interviews promoting Invisible Touch, both Banks and Collins stated that they felt that there may have been enough room on the album for these tracks, but they had to pick and choose which songs they felt to be a better fit to the overall sound of the album. The cut songs were later re-released on the Genesis 1983–1998 box set.

The lyrics to “Land of Confusion” were written by Mike Rutherford and comment on the political turmoil of the Reagan/Thatcher/Gorbachev era. A video for “Land of Confusion”, featuring the Spitting Image puppets, was nominated for MTV’s Video of the Year Award, but lost to former lead singer Peter Gabriel’s Sledgehammer. Phil Collins’s lyrics to “Tonight, Tonight, Tonight”, another hit song from the album, dealt with drug addiction, while “Anything She Does” (lyrics by Tony Banks) is about pornography. The lyrics to “Domino”, explore various applications of the domino effect.

Rolling Stone’s J. D. Considine praised the album, stating “every tune is carefully pruned so that each flourish delivers not an instrumental epiphany but a solid hook. Much of the credit for this belongs to Tony Banks, whose synth style has never seemed more appropriate; it’s his keyboards that set the mood for “In the Glow of the Night” and maintain the tension in “Tonight, Tonight, Tonight”.” Allmusic rated Invisible Touch three out of five stars. Some critics picked up on the album’s similar style and production to Phil Collins’ most recent solo album No Jacket Required which was released the preceding year; Stephen Thomas Erlewine, who reviewed the album, commented that “Invisible Touch was seen at the time as a bit of a Phil Collins solo album disguised as a Genesis album …. Genesis’ poppiest album, a sleek, streamlined affair built on electronic percussion and dressed in synths” and claimed “the heavy emphasis on pop tunes does serve the singer, not the band”. However, he said that “[the] songs had big hooks that excused their coldness, and the arty moments sank to the bottom”. Mark Putterford of Kerrang! remarks how the album shows “new ideas, new sounds, but still very definitely Genesis”. The album received Genesis an American Music Award nomination for Favorite Pop/Rock Band, Duo, or Group. At the Brit Awards in 1987, producer Hugh Pagham was nominated for Best British Producer and Phil Collins was nominated for British Male Artist, both for their contributions to the album. In 1987 “The Brazilian” received a Grammy Award nomination for Best Pop Instrumental Performance (Orchestra, Group or Soloist).

Catching Genesis at their commercial peak, Invisible Touch debuted at No.1 in the UK, while it reached No.3 in the US and went six times platinum there. The album was supported by the 1986–87 Invisible Tour, a concert video of which was released in 1988 and on DVD in 2003.

You Can Listen To Elvis Costello And The Attractions’ ‘Armed Forces’...