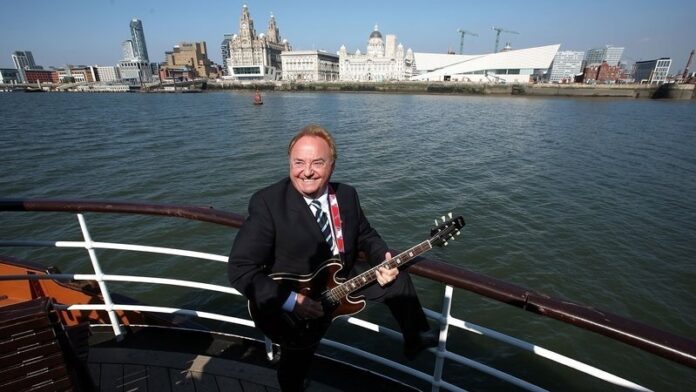 Gerry And The Pacemakers singer Gerry Marsden has sadly passed away at the age of 78.

The band played a key part in the Merseyside beat scene in the 60s and were managed by Brian Epstein, who also managed the Beatles.

Gerry Marsden’s passing was announced on social media on Sunday January 3. His friend, Peter Price took to Instagram to announce the news.

Price wrote “It’s with a very heavy heart, after speaking to the family, that I have to tell you the legendary Gerry Marsden MBE, after a short illness which was an infection in his heart, has sadly passed away. I’m sending all the love in the world to Pauline and his family. You’ll Never Walk Alone.”

‘You’ll Never Walk Alone’ was the band’s most notable song due to it being sung on terraces at Liverpool, Celtic and Borussia Dortmund. Other hits from the band included ‘Ferry Cross The Mersey’, ‘I’m The One’ and ‘Don’t Let The Sun Catch You Crying’.

Along with their hits, Gerry and the Pacemakers had sold out tours around the world. The band was active between 1955 and 1962 and for a second spell between 1972 and 2018.

Marsden was born in the Dingle district of Liverpool. Initially the band was called the Mars Bars, in the hope they would receive promotion from the confectionary company, but they were made change their name and became Gerry and the Pacemakers.

Marsden and the band travelled to Hamburg with the Beatles in the early 60s. Remembering those days, Marsden said “We went over with the Beatles and had a good laugh. All they had over there were oompah bands … we took over this music, and they loved it.”

Considering the close relationship they had with the Beatles, it is no surprise that Paul McCartney has paid his paid tribute to Gerry Marsden. Writing on twitter, McCartney wrote:

“Gerry was a mate from our early days in Liverpool. He and his group were our biggest rivals on the local scene. His unforgettable performances of You’ll Never Walk Alone and Ferry Cross the Mersey remain in many people’s hearts as reminders of a joyful time in British music…”

Gerry was a mate from our early days in Liverpool. He and his group were our biggest rivals on the local scene. His unforgettable performances of You’ll Never Walk Alone and Ferry Cross the Mersey remain in many people’s hearts as reminders of a joyful time in British music… pic.twitter.com/t1COAIwZVM

He went on to add “My sympathies go to his wife Pauline and family. See ya, Gerry. I’ll always remember you with a smile.”

Marsden on numerous occasions wrote or performed songs for charities and fundraising efforts, many of which included efforts to help victims of football disasters such as the Bradford Fire and Hillsborough. On these records he worked with McCartney, Motorhead and many more.

In 2003, Gerry Marsden was awarded an OBE. Since then, he had many operations on his heart but still performed when he could, including Liverpool’s celebration for winning the Champions League in 2019.

He is survived by wife, Pauline (nee Behan) whom he married in 1965, and their daughters, Yvette and Victoria.