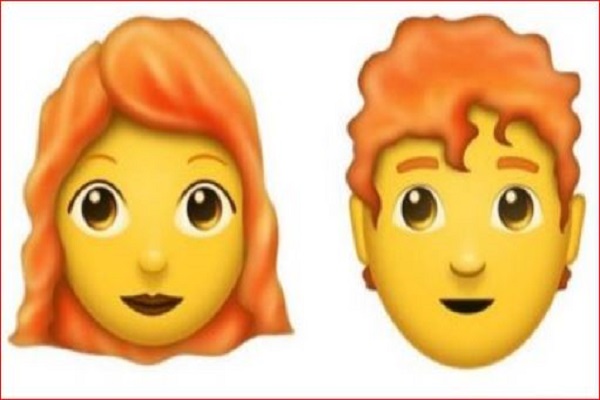 The ginger haired icons will be among nearly 160 icons being launched by the Unicode Consortium, which creates them. Other emojis will include bald heads, curly hair, silver foxes and afro haired emojis. A superhero, partying face and cupcake are included, too.

The emoji organisation has recommended nearly 67 new characters to join our phones. So it won’t be just ginger haired emoji’s that will be new!

According to Buzz.ie, roughly two years ago, more than 21,000 people signed a petition to get a ginger haired emoji created after new racially and sexually diverse emoticons were released.

The petition read: ‘If you say you’re going to diversify, why not add a few red-haired emoji in the mix? ‘Natural redheads may be rare at less than 2% of the world’s population, but that is 138,000,000 iPhones waiting to happen.’ The news of ginger haired emojis joining the team has been welcomed and excited by many emoji fans all over the world.

Red hair, curly hair, bald: A new batch of emoji hairstyles may be on the way https://t.co/hXUWNuxD46 pic.twitter.com/lCYdVMPlb7