Home Classic Albums You Can Listen To Guns N’ Roses’ ‘Appetite For Destruction’ Tonight From... 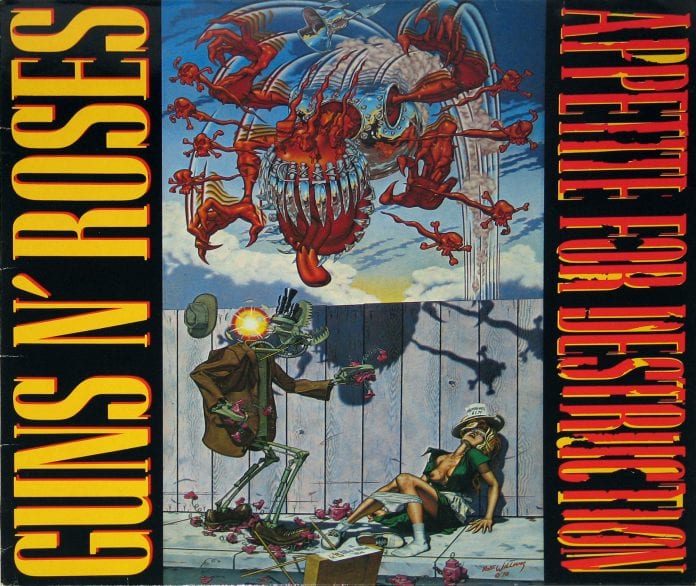 Appetite For Destruction is the debut album from Guns N’ Roses and was released on July 21st 1987. It launched the band into the spotlight and spawned some of the band’s most recognisable songs.

Guns N’ Roses debut, Appetite For Destruction was a turning point for hard rock in the late ’80s — it was a dirty, dangerous, and mean record in a time when heavy metal meant nothing but a good time. On the surface, Guns N’ Roses may appear to celebrate the same things as their peers — namely, sex, liquor, drugs, and rock & roll — but there is a nasty edge to their songs, since Axl Rose doesn’t see much fun in the urban sprawl of L.A. and its parade of heavy metal thugs, cheap women, booze, and crime.

The music is as nasty as the lyrics, wallowing in a bluesy, metallic hard rock borrowed from Aerosmith, AC/DC, and countless faceless hard rock bands of the early ’80s. It’s a primal, sleazy sound that adds grit to already grim tales. It also makes Rose’s misogyny, fear, and anger hard to dismiss as merely an artistic statement; this is music that sounds lived-in. And that’s exactly why Appetite is such a powerful record — not only does Rose have fears, but he also is vulnerable, particularly on the power ballad ‘Sweet Child O’ Mine’.

Rose also has a talent for conveying the fears and horrors of the decaying inner city, whether it’s on the charging ‘Welcome to the Jungle’, the heroin ode ‘Mr. Brownstone’, or ‘Paradise City’ which simply wants out. But as good as Rose’s lyrics and screeching vocals are, they wouldn’t be nearly as effective without the twin-guitar interplay of Slash and Izzy Stardlin, who spit out riffs and solos better than any band since the Rolling Stones, and that’s what makes Appetite For Destruction the best metal record of the late ’80s.

1. Welcome To The Jungle