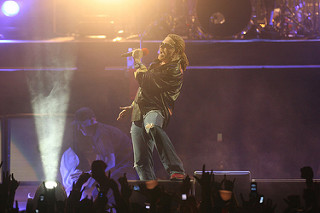 According to G N’ R guitarist Richard Fortus a new album is in the works. He said that the idea of recording a new LP was “too good not to happen”.

The classic rock band recently returned to Ireland for the first time in 25 years. Despite the heavy rainfall on the morning of the gig, over 80,000 fans travelled to Slane Castle to witness the iconic band’s return.

The band – which currently features Axl Rose, Slash, McKagan, Richard Fortus, Frank Ferrer, Dizzy Reed and Melissa Reese – have been laying down ideas for new material on the back of their current tour.

Fortus said: “We haven’t started recording anything, when I say that, as far as in the studio doing an album. We’ve been recording a lot of stuff, just ideas, assembling ideas, but not going into a studio and actually tracking a new record.”

Fortus, who has been a member of the band since 2002 added: “It’s sort of too good not to happen at this point, that’s how I feel about it. This band is really a force right now, and I definitely hope that we do, and I think we’re all sort of counting on it, and we’re also planning on it.”

It would be the first release for the band since 2008’s infamously delayed Chinese Democracy. Slash and McKagan haven’t featured on a G N’R record since 1993’s The Spaghetti Incident?.

Fortus also had high praise for front man Axl Rose’s songwriting skills, saying: “I think the genius of Axl is his ability to assemble songs, from different parts, and make them feel cohesive as a song. I’ve never seen anybody able to do that in the same way.”