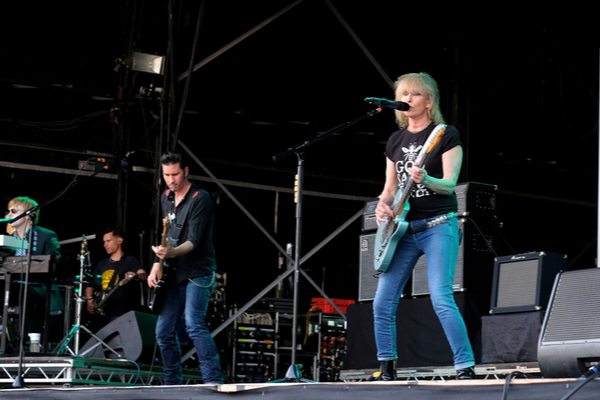 In a statement, Hynde explains that she recorded the album during the Covid-19 lockdown with her Pretenders bandmate James Walbourne. The record was made “almost entirely by text message” with Walbourne, who would record an initial idea on his phone. Walbourne would then send it to Hynde to add her vocal, before the tracks were mixed by Tchad Blak. All of the tracks were mixed by Tchad Blake, who also worked with artists like U2, Arctic Monkeys, and Fiona Apple.

“A few weeks into lockdown last year, James sent me the new Dylan track ‘Murder Most Foul.’ Listening to that song completely changed everything for me,” said Hynde. “I was lifted out of this morose mood that I’d been in. I remember where I was sitting the day that Kennedy was shot — every reference in the song.

“Whatever Bob does, he still manages somewhere in there to make you laugh because as much as anything, he’s a comedian. He’s always funny and always has something to say,” Hynde quipped. “That’s when I called James and said, ‘Let’s do some Dylan covers’ and that’s what started this whole thing.”

A behind-the-scenes television special will accompany the album to give fans a look at the recording process Hynde took for the Dylan covers. Produced by White Light Film Productions, and directed by Michael Nunn and William Trevitt, Tomorrow Is a Long Time will premiere Monday, May 24th on Sky Arts, Dylan’s 80th birthday.

The Pretenders are a British–American rock band who formed in March 1978 and had a string of top hits such as Back On The Chain Gang and Brass In Pocket. However, Hynde and the gang still release some decent tunes, including Turf Accountant Daddy from their 11th LP.