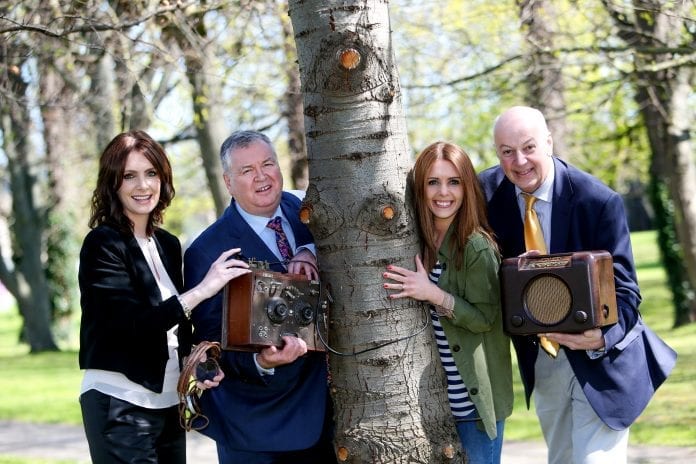 Irish Radio celebrates its 100th birthday with the first ever broadcast from the 1916 Rising re-created and simulcast by 37 radio stations nationwide including Radio Nova.

The dramatic story of the birth of Irish radio during the 1916 Rising will be re-enacted on air simultaneously by 37 radio stations nationwide on Monday, April 25th at 5.30pm, one hundred years to the original date and exact time of the declaration of the Irish Republic, Ireland’s first broadcast to the nation and the world.

In a joint initiative between RTE Radio and the Independent Broadcasters of Ireland (IBI) a highly evocative 80 second morse code themed radio experience titled ‘The Sound of Sixteen’ imagines the battle sounds and dangerous atmosphere of the times and also reprises the morse code message written by James Connolly and transmitted by Marconi operator David Burke.

The broadcast took place 190 metres from the GPO at what was then The Wireless School of Telegraphy at 10-11 Sackville Street (now O’Connell Street).  The full story of the drama that unfolded around the build up to the first broadcast (and subsequently) is told at www.thesoundofsixteen.ie

Lisa Ní Choisdealbha, Executive Director, IBI, said “This commemorative radio experience reminds us of why radio is such a powerful medium in term of its reach and ability to tell a story in a highly distinctive manner. The inaugural broadcast was apparently heard by boats in the Atlantic, stations in Germany and even by Japanese fisherman. Heard within Ireland it was a credible way to connect the new Republic to the national and international community. That sensibility continues to this day – radio gives us access to innumerable memories and experiences, making us feel connected to fellow Irish citizens on a daily basis and to an even broader international community.”

The Story of the First Broadcast:

·   Joseph Mary Plunkett had the idea to bypass British censorship by obtaining wireless transmission apparatus and broadcasting the news of the rising.

·   As a result, the Volunteers accessed the wireless transmission equipment from The Wireless School of Telegraphy, which had been sealed by the British Military after the outbreak of World War I in 1914.

·   The aerial for Ireland’s first radio broadcast was erected on the roof of The Wireless School of Telegraphy. The men erecting the aerial came under constant enemy sniper fire, ultimately forcing them to retreat for cover and finish construction during the dark hours of Easter Monday night.

·   The ‘broadcast’ element was somewhat of a happy accident. As the receiving apparatus was inoperative, it wasn’t possible to send a point-to-point transmission, i.e. get in direct contact with a ship or station. Therefore, the message was sent out as a diffused broadcast on the commercial wavelength, in the hope that some ship would hear it and relay the news to America.

·   Boats in the Atlantic, stations in Germany picked up the broadcast (and it’s even claimed to have been heard by fishermen off the coast of Japan), but the first listener was quite possibly a British naval vessel docked in Dun Laoghaire. An officer on board then promptly informed his commanding officer who, by all accounts, sent the HMY Helga up the Liffey to attack the position. By Wednesday afternoon shellfire from the Helga began to cause severe structural damage to the Wireless School, and the Volunteers had to evacuate the position.

·   A listener from the Isle of Man, who picked up the broadcast using personal transmission, promptly informed his local authorities of the rebellion in Dublin. The local police took note of his news, and then promptly threw him in jail for violating the Defence of the Realm Act, which prohibited the use of any personal transmission equipment.

·   One of the Irish Volunteers, who helped erect the aerials on the rooftop of 10-11 Sackville Street, was famed Abbey actor Arthur Shields. Shields would later move to Hollywood where he acted in various Hollywood movies, including The Quiet Man alongside John Wayne