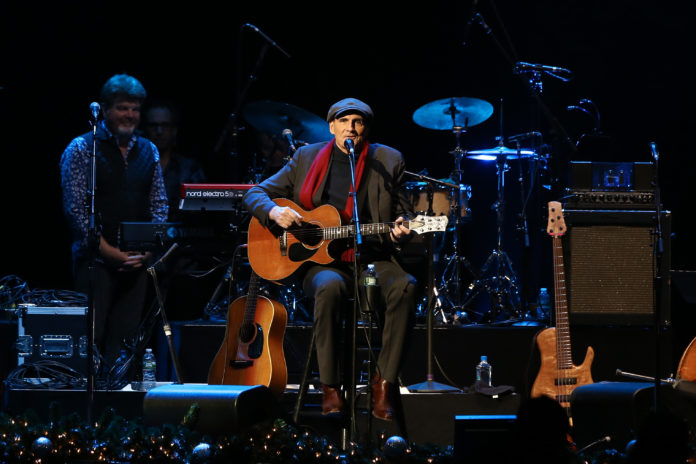 James Taylor has just announced a seven-date UK tour alongside his All-Star band set for January and February of 2022. The tour will kick off on January 27 of next year at the First Direct Arena in Leeds and wrap up with two performances at the Hammersmith Eventim Apollo in London on February 4 and 5.

Tickets are currently available for pre-sale and will be releases for general sale at 9am this coming Friday, July 16. The singer-songwriter’s last UK tour took place in the Summer of 2018 with performances in Manchester, Glasgow, Leeds, Dublin, and Cardiff, as well as an appearance at the Barclaryard Presents British Summertime Hyde Park music festival in London where he shared the bill with Bonnie Railt and Paul Simon, who headlined the festival.

Taylor recently secured his sixth Grammy Award win back in March for Best Traditional Pop Vocal Album for American Standard, a collection of covers featuring tracks from the Great American Songbook. Last month, Taylor performed a cover of Garth Brooks’ “The River” at the Kennedy Centre Honors 2021 where the country superstar was being recognized for his contributions to the genre.

Taylor and Jackson Browne are due to being their rescheduled co-headlining tour later this month on July 29. The tour was originally scheduled for Summer 2020, but was cancelled due to the pandemic. The rescheduled tour with run through August and the second half of October before concluding with a final performance in San Diego on November 1.

In preparation for his 2022 UK tour, Taylor has asked fans via social media to submit videos of themselves, in groups of five or more, singing along to his 1976 song “Shower the People”. Videos selected for use on the tour will be displayed via giant LED screens between Taylor and his band during performances of the song. The call for video submissions reads: “Please feel free to hold a flag of the place where you are from, or wear shirts/hats to identify your state, school, country, camp, hospital, place of work, favorite vacation spot, etc!”. The deadline for entries is at 6pm ET on July 13.

Keep That Sunny Spirit! We’ve Got Loads Of Events For You!