Home Entertainment John And Edward Will Shave Their Heads On The Late Late To... 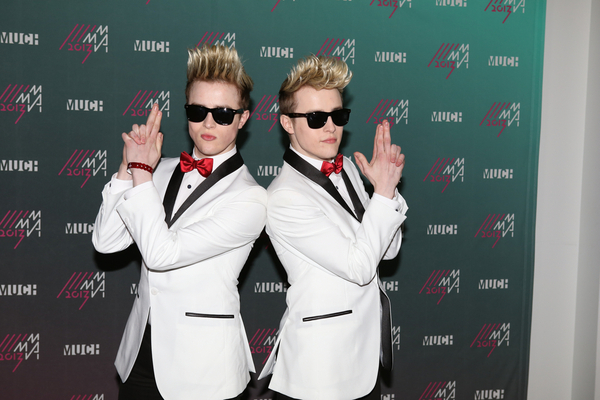 Jedward are about to do something really special on this week’s episode of RTÉ’s, The Late Late Show. John and Edward Grimes, 29, will appear on the show with Ryan Tubridy and shave off their iconic quiffs to raise cancer awarness.

For what has been their trademark for years, Jedward will be shaving their heads to help raise some much-needed funds. Cancer affected their family in 2019 when they lost their mum, Susanna, having been diagnosed with leukemia and kidney failure. Susanna worked as the twin’s manager for many years, and they would like to raise money in honour of her and “contribute to a cancer-free future”.

“We are on the Late Late Show this week, shaving off our quiffs to raise much-needed funds for the Irish Cancer Society,” Jedward said in a video shared on social media. “We hope all the funds raised will contribute to a cancer-free future. This is such a good cause. We’re sending so much strength and love to all those suffering with cancer.”

Jedward took to Instagram to further explain it is happening “to support the fighting heroes going through cancer! We’re hopeful the funds raised will contribute to a cancer free future. We are honouring the memory of all those that have come and gone! We are sending strength and love to all those suffering, Don’t give up! @irishcancersociety Tune into @rteone
Late late show this Friday National Daffodil Day” 💛🌼🌼🌼
#jedward #cancerawareness #irishcancersociety

Jedward’s mop chop will take place on Daffodil Day and the show will be dedicated to the work of the Irish Cancer Society. For what is normally a huge contributor with on-street donations from the public, the pandemic has cancelled that process for the second consecutive year. Fundraising focus has now been moved to online and text donations, with more information at cancer.ie. This year, The Late Late Show vowed to get behind the initiative and raise vital funds for the charity to support patients with cancer and their families.

Jedward will shave goodbye to their iconic styles on The Late Late Show this Friday at 9:35pm, in what will be an end of a HAIR-a. The show took to Twitter saying, “We could all do with a haircut at this stage but @PlanetJedward are going one step further Man getting haircut. They’re joining us this Friday night to shave each other quiffs to raise much needed funds for the @IrishCancerSoc. Join us on Friday night!”

You can join in on the action yourself and shave, or dye your hair for charity. “Thousands of participants have been getting their friends and family to sponsor them to shave or dye their hair. By shaving or dying your hair, you are showing your support for thousands of people who are going through, or have gone though, cancer treatment.”