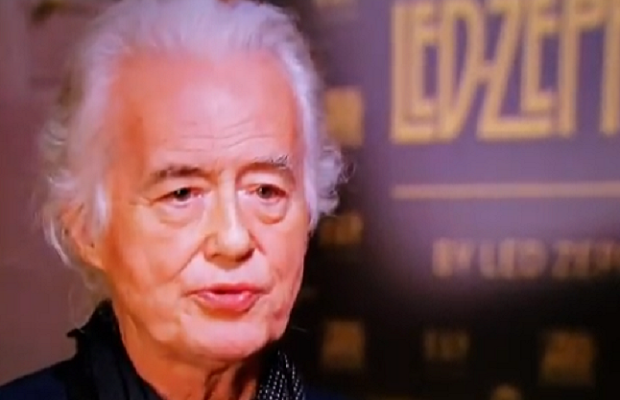 Jimmy Page was a featured guest on CBS This Morning on October 8th and a video from the legendary guitarist’s appearance is now streaming online and is available below.

Page joined CBS News foreign correspondent Charlie D’Agata at the National Portrait Gallery in London for a chat. The venue was where Led Zeppelin held an event to promote their official photo book “Led Zeppelin By Led Zeppelin”, which is due for release on October 9.

D’Agata asked the axeman, “Was there a moment when the four of you got together the first time, the first couple of times and thought, ‘Wow!’?”

Page explained, “Well, the first rehearsal that we did was here in London, in a rehearsal room where we had maybe an hour or two hours and we just got together, and we counted, ‘1, 2, 3, 4 …’ and were all playing, and we just kept extending the song and jamming on it. And by the end of it, I absolutely guarantee it was a life-changing experience for everyone from that point. Everyone knew that they’d never played with musical equals.”

As Page formed the Led Zeppelin lineup, he had a clear vision of how to present the band to the world. “I knew that the way to do it was to have four musicians that were just really locked in tight and everyone could be heard on the record, so it wasn’t just about one person but the overall,”

For the 50th anniversary celebrations, “Led Zeppelin By Led Zeppelin” comprises an extensive archive of previously-unseen photos handpicked by the surviving members of the group. Watch the CBS video below.

Shane MacGowan Set To Get Married To Victoria Mary Clarke!