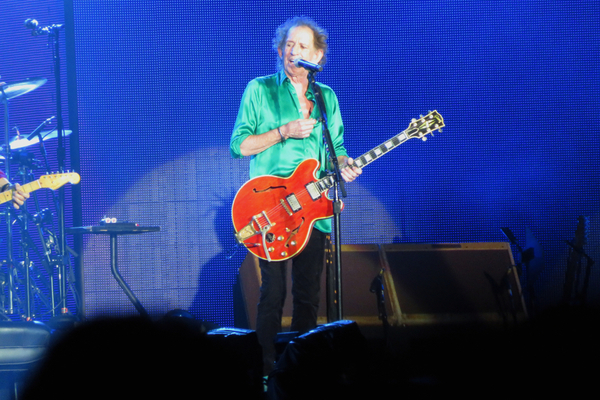 Keith Richards has claimed that that the new Rolling Stones tracks will show him “playing a lot of bass”.

“It’s sort of metamorphosing into something else. I was working with Mick last week, and Steve, and we came up with some, eight or nine new pieces of material. Which is overwhelming by our standards. Other times, [songwriting is] like a desert”, Richards said.

“It’ll be interesting to find out the dynamics now that Steve’s (Jordan) in the band”, he added.

And now, he has said that picking up the bass guitar has provided “another angle” to their sound. He also stated that there are more tracks coming up that he “can count”.

“It’s quite interesting – at the same time it’s Stones man”, he also added.

On top of this, the guitarist also spoke about spending a week in Jamaica with Rolling Stones frontman Mick Jagger.

According to Richards, him and Jagger have a “got a very good sound going”, adding “Jamaica is good for sound”.

Rolling Stones Are “Gearing up” For Touring – Richards

In the same interview, Keith Richards stated that the Rolling Stones are “gearing up” for their upcoming 60th anniversary UK and European Tour.

Speaking of his own desire to hit the stage, he said, “Once a year I like to keep my hand in – there’s nothing like playing on stage”.

Elsewhere, Keith Richards had insisted that Rolling Stones do not have any current plans to sell the publishing rights for music.

“Mick and I have not spoken about it on a serious level”, Richards said on the matter. “I don’t know if we’re ready to sell our catalogue”.

“We might drag it out a bit, put some more stuff in it. The only thing about selling your catalogue…it’s a sign of getting old”, he added.