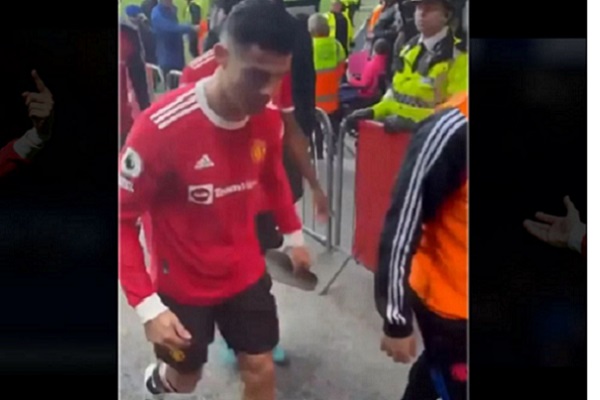 Manchester United have confirmed that they will not take action against Cristiano Ronaldo after he appeared to knock a teenage Everton fan’s mobile phone out of his hand.

This incident took place after Man United’s 1-0 defeat to Everton at Goodison Park in the Premier League last Saturday.

Despite the police probe continuing, both clubs are satisfied with the Portugese’s apology. They also added that they will no longer be investigating this incident.

Man United had initially confirmed that an investigation would be launched. Eyewitnesess had claimed that Ronaldo threw supporter’s mobile phone to the ground.

The fan’s mother Sarah Kelly claimed that Ronaldo had “assaulted a child”. She had taken her 14 year old son Jake to the match for the first time.

“Can’t believe I’m saying this”, she wrote. “But Ronaldo smashed Jake’s phone out of his hand while he was recording him coming off at full time”.

“I’m shocked that a professional footballer can assault a child like this. If anyone can get any videos of this for me I believe they’re on Instagram already”.

Ronaldo had issued a grovelling apology after the incident.

“It’s never easy to deal with emotions in difficult moments such as the one we are facing”, he wrote. “Nevertheless, we always have to be respectful, patient and set the example for all the youngsters who love the beautiful game”.

“I would like to apologise for my outburst and, if possible, I would like to invite this supporter to watch a game at Old Trafford as a sign of fair-play and sportsmanship”.

Despite this, Merseyside Police had confirmed that they are still investigating the incident.

“We can confirm that they’re carrying out an investigating following an incident at the #EVEMAN match at Goodison involving a player as they were walking off the pitch and will be speaking to all parties involved”.

Cristiano Ronaldo has also brought much joy to millions of fans over the years. No more so when he brought a young Irish fan to tears when he handed her his jersey following his country’s draw with the Republic of Ireland last November. See here.

The Sweetest Thing This Halloween