Home Music News What Is Metallica’s Most Commonly Used Lyric? Find Out Inside! 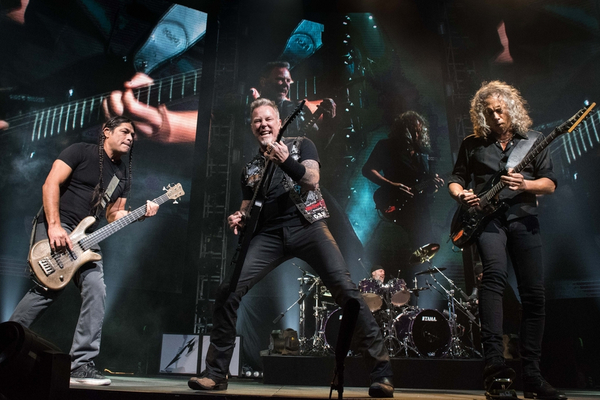 James Hetfield is Metallica’s lyrical genius with a vast, vault of vocabulary, but even the best song writers have key, go-to words. When thinking of the vocalist’s most commonly used words, “Yeeeaaaahhhh” would first spring to mind, as it is his signature screech. However, if you think it is Hetfield’s most commonly used word in Metallica’s songs, you are sadly mistaken.

The only way to find out is to create some sort of word graph of the band’s songs, and, one Reddit user did just that. Thanks to the immense efforts of a Metallica fan on the Metallica Reddit page, we know what the band’s most commonly used word is.

According to a Reddit user, u/Relic827, Never! Is Hetfield’s most screeched lyric, with a total of 146 times in total. The fan created a graph of the most frequently occurring words in Metallica’s lyrics, and the adverb was the top word.

Considering one of their absolute most famous songs, Enter Sandman, has the lyrics “Off to never never land”, this is no surprise. Other songs that feature the word are, obviously, Through the Never and The Day That Never Comes, and less obvious ones such as The Unforgiven, Nothing Else Matters, Don’t Tread on Me, Wherever I May Roam, Master of Puppets, and plenty more.

One, See, Away, Take, and Life are some of the other words the band repeats a lot, but what about that iconic “Yeeeaaaahhhh” of Hetfield’s? According to the graph, the word is said a total of 68 times in the songs on Metallica’s albums, ranking 12th on the graph.

The mega fan did not express the exact method they used to come to the figures we see on their graph. Another graph was made almost two years ago when a Slipknot fan did a similar experiment with their lyrics. Oddly enough, the Iowa heavy metal band’s most commonly used word is also “never”.

Through the use of Hetfield’s somewhat repetitive lyrics, Metallica have created ten studio albums, which have stood the testament of time. The band’s sixth studio album, Load celebrated 25 years this month as it released on June 1st, 1996.

The most common words in Metallica lyrics (excluding “and,” “the,” etc. I left in “yeah” because…well, come on lol) from Metallica

Free Fender! Get 3 Months Of Guitar Lessons For Nothing