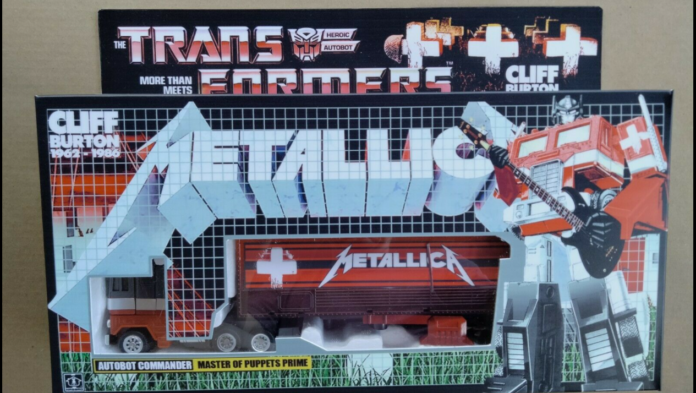 There are a community of makers who build one-off custom models based on the Transformers franchise. Modeller Simon Smith has combined Metallica with a Transformers G1 Optimus Prime, creating a Cliff Burton-celebrating “Autobot Commander Master of Puppets Prime”.

“I received a request sometime last year from a collector on Instagram for a new Metallica Optimus Prime to be made”.

He also added, “I wanted to base this off of the album cover and pay respects to Cliff Burton at the same time so we have a blend of the two ideas”.

“The box layout is pretty epic. There is no doubt who this piece is based on and the top flap with the three crosses really drives home the feel from the album”.

“Making this piece I listened to Master of Puppets over and over again and it really got to me that we had lost such a passionate musician like Cliff Burton. Cliff was one of the major forces that propelled Metallica’s music in the early years to another level”.

Simon Smith then posted the model on eBay. At the time of writing this, the highest bid stood at $610. Check it out for yourselves here.

Last month, Metallica’s James Hetfield spoke about how important music has been in his life.

Speaking in a pre-recorded broadcast for the Little Kids Rock organisation, Hetfield had this to say. “I’m here as an example of how music has saved lives. It has been a passion of mine since the early, early times. Music has been an outlet for me, it has been a connection, it has been a best friend for me for my whole life”.

Read more on that story here.

Meanwhile in March, Elton John revealed that he and Metallica were working on some new music during Lockdown.

“I’ve just done something with Metallica. During this lockdown period. I’ve been working with Gorillaz and people like that”, he said. “I haven’t been doing any Elton stuff, but I’ve been doing great stuff with other people. So I’ll get you my email, email me and let’s get together and do something, okay?”.

Kings Of Leon Announce New Album Called ‘When You See Yourself’

Much Loved Metal Bass Player Was Accidentally Filmed By His Killer