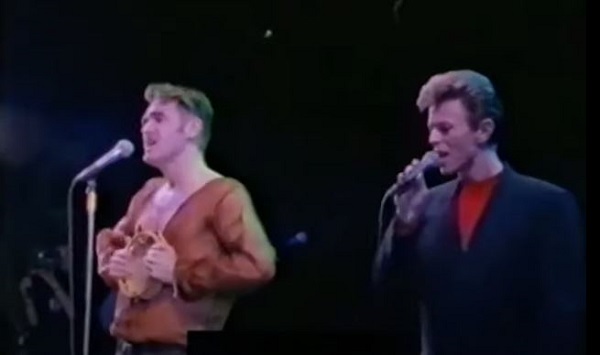 Morrisey and David Bowie’s live cover of T-Rex’s ‘Cosmic Dancer’ has been officially released.  The pair got together for the cover during a show at The Forum in Los Angeles in 1991. Their rendition has been curated online in the two decades since.

The track is now available to download on streaming services. Meanwhile, a 7″ vinyl version is due to release on February 19th. A cover of The Jam‘s ‘That’s Entertainment’ will be on the other side of the single. Although as Morrissey’s official website points out, it is not the same version as the 1993 one available on the internet.

Morrissey and Bowie had a ‘bit of a tiff’

When speaking to the crowd at a gig in the Manchester Arena, Morrissey famously omitted Bowie from a list of celebrity deaths. While performing, the Smiths singer began listing all famous people that died, before singing All the best ones are dead.

Comedian Victoria Wood, actress Caroline Aherne, boxer Muhammad Ali and Prince all got a shout out, but not Bowie. The singer passed away earlier that year. The crowd then (rightly) began to boo Morrissey for the omission. Morrisey and Bowie’s relationship was tense and that dated back to touring together in 1995.

In 2013, Bowie refused to let Morrissey use a photo of themselves together for cover art. This led to Morrissey replacing him with Rick Astley instead.

Although, Morrissey did address their rivalry in 2014.

“I know I’ve criticised David in the past, but it’s all been snot-nosed junior high ribbing on my part. I think he knows that.”

In March of this year, Morrissey released his 13th solo studio album I Am Not a Dog On a Chain. Meanwhile, a special vinyl of David Bowie‘s 1975 Young Americans collection also came out this year.