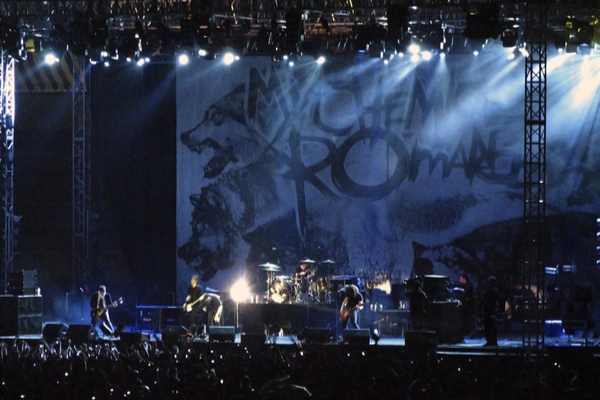 In what was their first UK gig in 11 years, My Chemical Romance treated fans to a set of deep cuts and rarities.

The band also played their latest single ‘The Foundations of Decay’ for the first time.

Performing at St Austell’s The Eden Project at Cornwall, My Chemical Romance treated fans to a live rendition of ‘The Foundations of Decay’.

They also performed tracks from 2004’s ‘Three Cheers For Sweet Revenge’, including ‘Give Em Hell Kid’ and ‘Helena’.

My Chemical Romance also used tracks from their B side compilation ‘Conventional Weapons’, including ‘Make Room!!’. Other tracks from that compilation performed on the night also included, ‘Kiss The Ring’, ‘Boy Division’ and ‘Surrender The Night’.

Addressing the crowd at the start, My Chemical Romance frontman Gerard Way asked, “So how have the last two and a half years been for you?”.

The band started the night off by performing ‘This Is How I Disappear’. Check out the footage below.

The band finished out the set with ‘Danger Days’ track ‘The Kids Of Yesterday’.

“This has been a really special night for us. We hope it was similar for you”, Way told the crowd before singing this track.

This also comes after My Chemical Romance announced details of two live shows at Dublin’s Royal Kilmainham Hospital on May 24 and 25.

The band also confirmed that Starcrawler and singer Gayle will join them on stage. More on this report from Nova here.

Another My Chemical Romance performance has been mentioned recently. This sees Queen’s Brian May joining the band on stage during the 2011 Reading Festival. Check it out below.

The band also performed ‘We Will Rock You’ alongside May.

“The Chem boys [are] the nicest bunch of guys you could possibly meet. Dedicated, inspired, modest, appreciative, considerate, and with all the crackling electricity of a touring unit just reaching a peak of perfection”, May said of the band at the time.

Beyoncé Made Music History At This Weekend’s Coachella Festival