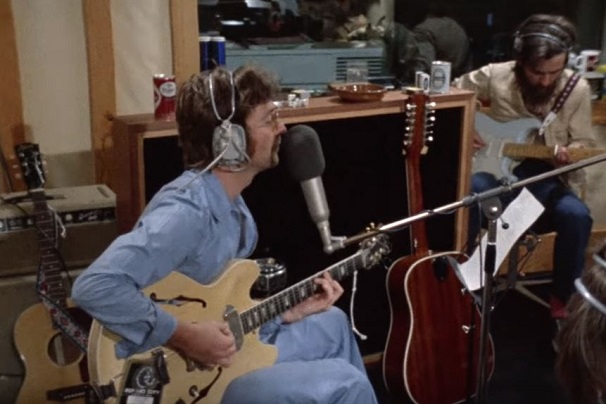 Unseen raw footage of former Beatles John Lennon and George Harrison during an intimate recording of the electric track “How Do You Sleep,” was released on Friday, September 21st. It’s available below.

The song, originally available in 1971 was taken from John Lennon’s Imagine record, is focuses on ex-Beatles bandmate Paul McCartney after the band’s demise the previous year. The relationship between the two became unsteady following the song’s release. That’s according to a letter between the musicians from the same year that was recently auctioned.

Shot in Ascot, England, the video reveals Harrison playing on Lennon’s blue guitar along with longtime friend Klaus Voormann enlisted on the bass, Alan White plays drums with Rod Lynton and Ted Turner on acoustic guitars, and a few other punters present.

The song is set to appear on the six-disc record set Imagine: The Ultimate Collection which will be made available on Oct 5th.