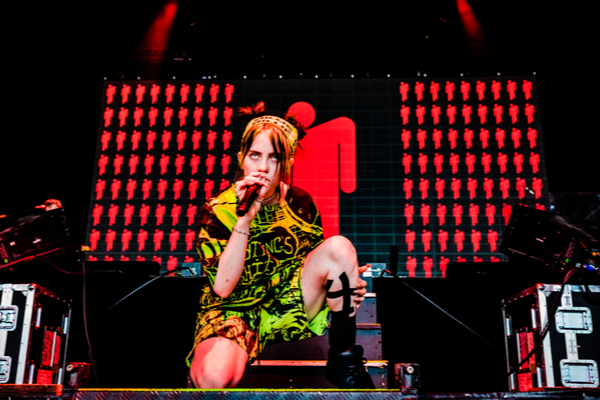 Billie Eilish is hitting out against the Roe v Wade reversal during her Glastonbury performance.

“Today is a really, really dark day for women in the US,” the 20-year-old said from the Pyramid Stage.

“I’m just going to say that because I can’t bear to think about it any longer.”

She then dedicated her song “Your Power” to it

Eilish’s performance made her Glastonbury’s youngest-ever solo headliner, at the age of 20.

She emerged on stage shortly after 10 o’clock, launching into her opening song, Bury A Friend.

The young singer wore a T shirt featuring newspaper headlines and images including David Bowie and Sharon Tate, the Grammy-winning singer was welcomed to the stage excitedly from the largely Gen-Z crowd

Earlier in the night, indie-folk star Phoebe Bridgers also hit out at the Roe V Wade decision and made a similar statement during her festival debut on the John Peel stage.

“This is my first time here. It’s surreal and amazing but I’m having a real [expletive] day,” she said.

Bridgers continued by cursing the “old” Supreme Court justices “who try to tell us what to do with our bodies”.

She asked if any Americans were in the audience, then added: “Who wants to say, ‘F*** the supreme court’? One, two, three…”

On Friday, the US Supreme Court overturned a 50-year-old ruling known as Roe v Wade which legalised procedures across the country.

The decision means millions of women across the US will lose their legal right to abortion.  Individual states will be able to make their own laws on it.

Abortion clinics have begun closing in parts of America.

In a number of states, the ruling triggers immediate bans on terminations.

US president Joe Biden called the ruling a “tragic error” and said it had led America down “an extreme and dangerous path”.

Falling In With The Fall Out Lads!

The Pixies Reveal That They Are “Working on New Music”