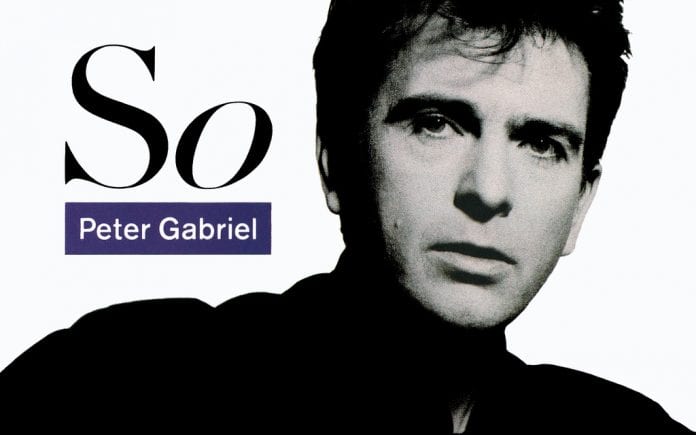 So is the fifth studio album by English rock musician Peter Gabriel. The landmark album  was released on 19th May, 1986 with Charisma Records in the UK and Geffen Records in the US.

Gabriel was joined with renowned producer Daniel Lanois in producing So. Lanois and Gabriel had previously worked together on the soundtrack to 1984 film, Birdy. There are a number of well known credited musicians on this album, including; Nile Rodgers and Kate Bush.

Gabriel is said to have become ‘obsessed’ with the track listing towards the end of recording, he wanted to blend the tracks together so that the album would flow seamlessly.

So has been described as Gabriel’s ‘least experimental’ album and ‘most commercially accessible’ album. It distinctively combines elements of soul and world music, with a specific emphasis on African and Brazilian music.

Upon release in May 1986, So topped the charts in seven countries worldwide. It became Geffen Records most successful commercial release; it lasted on the charts for ninety- three weeks, reaching number two. The lead single from the album, ‘Sledgehammer’ rose to the charts and became Gabriel’s first and only number one on the Billboard Top 100. The songs music video became the most played video in all MTV’s history, winning nine awards at the MTV video awards, a record that has gone unbeaten. ‘Sledgehammer’ was followed by singles ‘Don’t Give up’, ‘Big Time’ and ‘In Your Eyes’.

The album gained mostly positive reviews from music critics. Gabriel was credited for his transformation from cult artist to an internationally acclaimed musician due to the success of So. Gabriel received nominations for album of the year, record of the year, Song of the Year and Best Male performance at the 29th Annual Grammy Awards in 1986. At the Brit Awards, Gabriel won Best British Male Artist and ‘Sledgehammer’ won Best Video. So is regarded as one of the best albums of the 1980’s, and ranks 187 on Rolling Stone 500 Greatest records of all time.