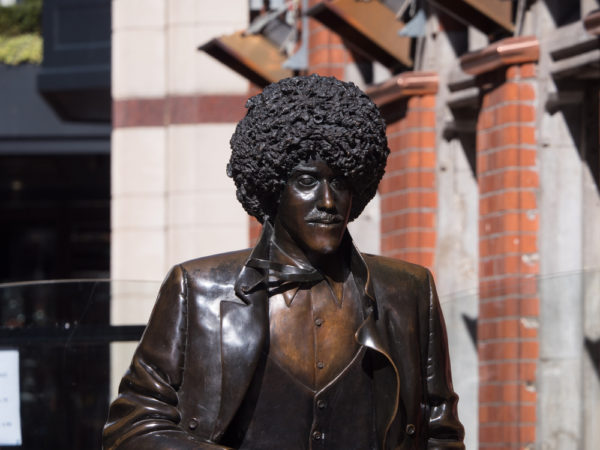 Thin Lizzy frontman, Phil Lynott, celebrates his birthday anniversary tomorrow, one day ahead of another special date. His metal counterpart located just off Grafton Street is celebrating its own anniversary.

Lynott became immortalised in bronze 13 years ago today. That was after a five-year campaign brought the statue of the iconic rocker to his home just off Grafton Street in Dublin.

The Roisin Dubh Trust and Lizzy fans showed their die-hard admiration of the songsmith by funding the erection of the bronze statue roughly two-decades after his tragic death. The ceremony was attended by his Mother, Philomena and former Thin Lizzy band members Gary Moore, Brian Robertson and Scott Gorham.

When Philomena Lynnot unveiled the statue over a decade ago she said, “It is the proudest day of my life, for over 20-years I have been looking forward to it.”

The statue has had its fair share of knocks The guitar has been stolen at least once, while in May 2013, two men were arrested after pushing the statue over, causing serious damage to its coat.

Last year a van driver inadvertently ran into it, snapping the bass in half.  All was well until suddenly it mysteriously disappeared overnight. Dublin council had removed the statue to install new paving for Harry Street. The council deciding to take it “away late at night so as not to upset pedestrians.”

The Roisin Dubh Trust first contacted Dublin City Council in January 2000 to get a statue installed to honour Lynnot and plans were approved by the council in February 2001. Director of the Roisin Dubh foundation Audrey O’Neill, said Lynott “would have been quietly proud of the accolade in Dublin city.”

Sculptor Leo Higgins said of his creation, “There is a wonderful video of him singing a song Old Town, he was at the height of his success and he is walking down that particular area of Grafton Street and he just looks amazing. We captured that I think in the statue.”