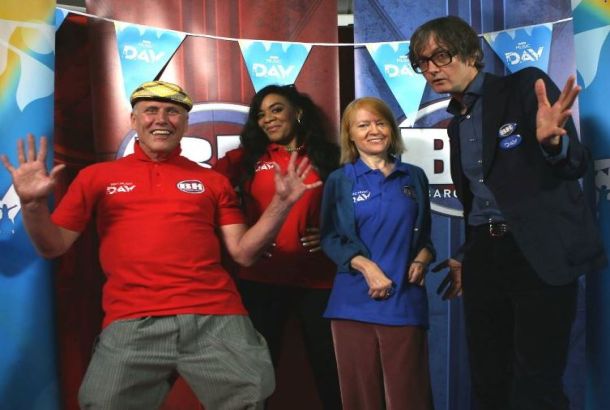 Pulp and the Happy Mondays are due to compete in a new edition of Bargain Hunt!

The daytime TV show is a favourite with adults on a day off work, children who’ve pulled sickies and anybody else who might find themselves about the home. A scheduled edition is due to feature the two legendary British groups, with Happy Mondays and Pulp going head to head in the search for cut-price antiques!

BBC 4 show ‘Woman’s Hour’ will publish the Women in Music Power List which aims to compile “the Top 40 female voices in music, from songwriters and performers to managers and producers”. All shows are set to broadcast as part of BBC Music Day on September 28th.

Kylie Minogue, Gareth Malone and Ella Eyre will also join in the UK-wide celebration of music, which takes place on September 28. Antipodean songstress Kylie will attempt to encourage commuters to do The Locomotion with her as she voices train announcements at major stations across the UK, following Shaun Ryder’s surprise stint as the voice of the Manchester trams last year.

Meanwhile, there are signs of a new album on the cards from Jarvis Cocker, according to a press release, ‘most of the songs are new but some will be familiar.’ Cocker completed a UK tour in March of this year. Who’d have believed that two of the most famous British bands from the last century would be going head to head in an edition of Bargain Hunt!

24hr Oak Partition People: Sorted for Antiques and Bez (and Rowetta, Candida, and Jarvis too). A special edition of Pulp vs Happy Mondays on Bargain Hunt will air in September to coincide with BBC Music Day, which takes place on the 28th. #BBCMusicDay pic.twitter.com/wtZJcE1Tqz

WATCH: “Herself” makes you re-evaluate yourself ★★★★★

The Bodyguard Is To Get A Remake Through Warner Bros!