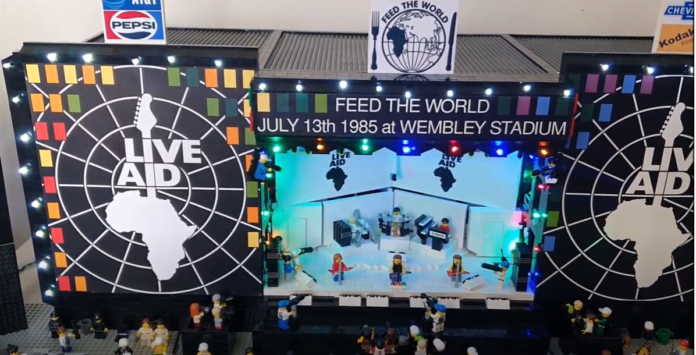 Queen have become the latest band to have one of their iconic concerts immortalised in a lego site.

Last week it was reported that Rammstein were backing a campaign to have their stage set immortalised as a lego set. This proposal had been put forward by a fan of the band and a lego enthusiast known only as “Airbricks”.

“Rock concert scene consisting of 6 members 2 guitarists 1 bassist 1 keyboardist 1 drummer and 1 singer the es made up of 1493 coins. The scenes can be modulated according to your taste and there is a functional elevator to say goodbye to the public at the end of the concert”.

“I create them to remind me of the good times spent at the concert when we didn’t have this disease hanging around hoping that soon all this will be behind us. I hope many of you will like it and that you will vote for my project to title Stadium Tour thank you in advance”.

Now, Queen’s iconic performance at Live Aid has now become another center of lego attention. Lego ideas user Mincher_Lee is constructing a replica Live Aid stage set. This will include band members. He hopes his idea will be made into an official lego kit.

Lego Ideas was set up to nurture a builder’s community around lego and ideas that generate more than 10,000 supporters for real-life production. The orginal designer will receive the royalty.

“The scene used three 32×32 panels”, Mincher_Lee said. “It’s a big shock that the final scale is three times bigger than a Lego Street View. Both sides of the wall are printed with the Live Aid logo, There are many details in this set, especially the various instruments on the stage”.

So far, over 30 projects have been approved along with Queen. Such projects include a lego model of the Beatle’s Yellow Submarine. This was launched in Christmas 2016.

Other projects include a lego model of Freddie Mercury in his inconic onstage pose, a lego carousel featuring the first of Iron Maiden’s four albums, as well as a lego model of Metallica’s Master of Puppets cover.

Speaking of Queen, Brian May recently admitted that  whilst he is proud of the band’s 50th anniversary, it is difficult to fully celebrate this milestone without Freddie Mercury. More on that story here.