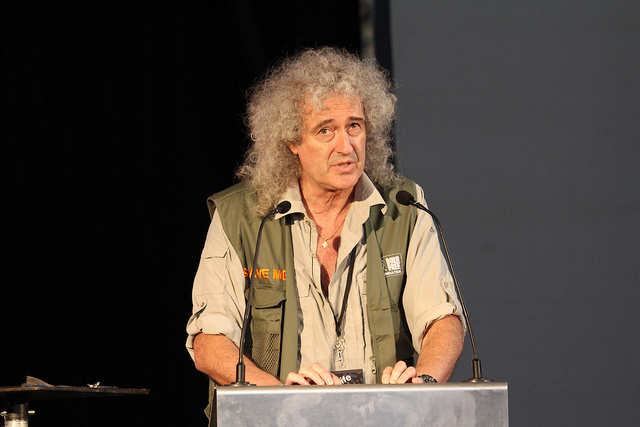 Queen guitarist Brian May has revealed that he recently suffered a heart attack and opted to have three stents placed in his arteries rather than undergo bypass surgery.

May has kept fans abreast of his recent injury in which he ripped his buttocks “to shreds” during a freak gardening accident. He again took to social media to explain that while his medical team was trying to ascertain why he was in such non-stop pain, they discovered a compressed sciatic nerve during an MRI of his spine. May explained “(It was) quite severely compressed and that’s why I had this feeling that someone was putting a screwdriver in my back.”

Brian May also admitted the compressed sciatic nerve turned out to be the least of his worries: “I had a small heart attack. And I say, ‘small’ — it’s not something that did me any harm. It was about 40 minutes of pain in the chest, and tightness, and that feeling in the arms, and sweating and, y’know. . .  You’ve kinda heard. . .  You kinda think, ‘Ah, actually this is a heart attack?’ And there was a lot of pressure, because I actually tuned out to have three arteries, which were congested and in danger of blocking the supply of blood to my heart.”

He went on to say that there were two very definitive camps pushing for what type of treatment he should undergo: “There was a lot of pressure from some quarters to have the open heart surgery, where they saw through your, your rib-cage, where they open your heart up and have a triple bypass. And a lot of people said, ‘If you don’t do this, you’re throwing a way your only opportunity and you’re going to regret it for the rest of your life.’ But, I had other people telling me, ‘Look, you don’t need to do this. You can have three stents put in and you can walk tonight or tomorrow morning.’ So, after a lot of thought and deliberation — I opted for stents.”

Ultimately, Brian May told fans: “I was very near death from this but the pain I had was from something completely different. It’s funny, but I’m good, I’m here and I’m ready to rock. . . There’s no need to panic, please don’t send me sympathies, send me congratulations.”