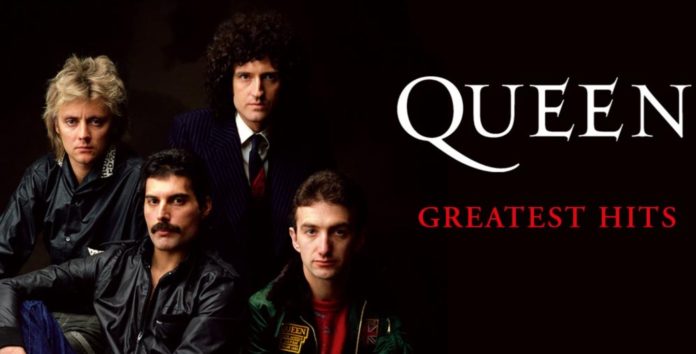 For the first time in 40 years, Queen’s “Greatest Hits” album is set to reach number one in the UK Official Albums Chart this week.

The reason for this is, that a special 40th anniversary edition of the album has been released. 86% of the new special edition record sales have come from physical formats so far.

This re-released album also includes a collector’s edition of the CD, along with an exclusive slipcase cover. It will also have a limited edition cassette available in five different colours.

The orginal album was released on 26 October 1981. It spent a total of 942 weeks in the album charts, including 4 weeks at number one.

“Greatest Hits” also remains the best selling album of all time in the UK, having sold 6 million copies.

A limited number of variants of the album will also be availble on the band’s website. More on that here.

If the album continues to maintain its current hold in the Official Charts update, it will mark its fifth total week at top spot in the Offcial Albums Chart.

On top of this, it has also emerged that Queen are still making a profit of £100,000 a day from Freddie Mercury’s biopic “Bohemien Rhapsody”, since its release in 2018.

It was reported that the film made $900 million in the box office, according to recent figures from Custom’s House. Brian May, John Deacon, Roger Taylor and Mercury’s Estate are seeking a sizeable sum of that money.

The band have also profited £11.8 million pre tax, with a £21.9 million turnover. Following the film’s release, Queen Productions have registered a turnover of £42 million in the 12 months dated to September of last year. This makes over £19 million pre tax.

The biopic itself starred Rami Malek and it divided critics and fans alike. It explored Freddie Merrcury’s childhood, joining Queen along with his career as a solo artist.

More on that report from Nova right here.

You Can Listen To Rod Stewart’s ‘Every Picture Tells A Story’...