Home Music News Have Radiohead Got Something Up Their Sleeves? 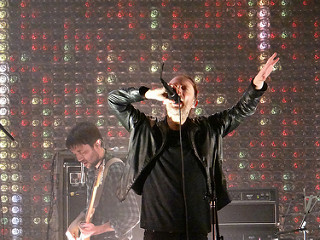 So, Radiohead posters have been spotted in London, Berlin, Amsterdam, Los Angeles and New York.

Radiohead fans have gotten themselves into a frenzy over on Reddit, speculating that the band could be set to mark the 20 year anniversary of their classic album OK Computer. Which is a pretty plausible presumption given that the posters seem to reference the band’s ‘Fitter Happier’ lyrics and concept art from the ‘OK Computer’ era. They also feature the dates ‘1997 – 2017’. Check one out below.

OK Computer was released in the UK in June 1997 and is widely regarded as one of the greatest records of modern times.

It was the third studio album from Radiohead and it catapulted the band into the spotlight as Britpop had reached its peak. Using the textured soundscapes of The Bends as a launching pad, Radiohead delivered another startlingly accomplished set of modern guitar rock with OK Computer. The anthemic guitar heroics present on Pablo Honey and even The Bends are nowhere to be heard here.

The album is filled with moody masterpieces, from the shimmering ‘Subterranean Homesick Alien’ and the sighing ‘Karma Police’ to the gothic crawl of ‘Exit Music (For a Film)’. OK Computer is the album that establishes Radiohead as one of the most inventive and rewarding guitar rock bands of the ’90s.

Now, with the 20th anniversary fast approaching, it seems like the fans could be on to something with their online speculation over the recent posters. We’ll be sure to keep you up dated here at Radio Nova.

“Enter Sandman” Was Our Generation’s “Stairway To Heaven” – Taylor