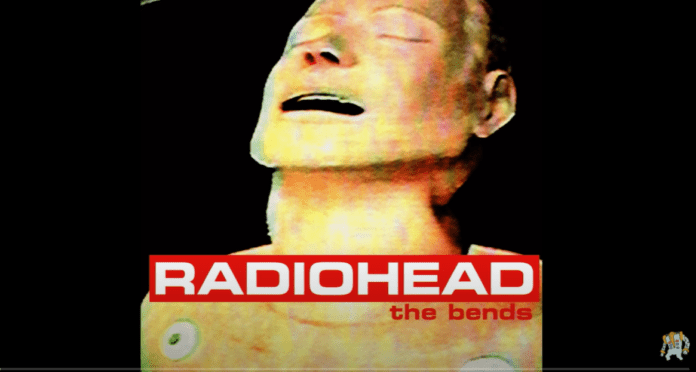 A sketchpad that was used by Radiohead to jot down ideas for their album The Bends is to be sold at auction. The pad was found by a man in a fruit farm, which was used by the band to rehearse for The Bends in 1993.

The man was given the pad as he cleared the studio space at the end of their sessions. He also supplied a PA Sounding system and group instruements for the band. The pad includes written lyrics, hand-drawn drawings as well as chords.

The pad also contains workings for two Radiohead songs, “Idiot Boy” and “Too Easy”. Lyrics for classic hits such as “Street Spirit (Fade Out)” and an unreleased song, “Dead Band Clerk” are also included in the pad’s pages.

He is now selling this piece of memorabilia which is expected to sell for at least £10,000.

The man who wishes to remain anonymous said, “When the sessions were over I went to retrieve my equipment and ‘clear out’ the room”.

He also added, “The A2 sketchpad had been left” with “some carpeting that had been used as acoustic treatment”.

The man said that anything that was left at the barn when Radiohead were finished, could be thrown away or kept by him if he wished.

“I was informed that anything remaining in the room was not required by the band and should be thrown away or kept by me if I so wished. I kept the sketch pad and discarded the carpeting”.

“A crucial period in the group’s history”

According to experts the pad gives, “an insight into a crucial period in the group’s history”.

Auctioneer, Paul Fairweather said, “The Bends was absolutely crucial to the band’s success and the notepad really gives an insight into the fascinating creative process that resulted in the creation of true classic of the genre”.

Also going under the hammer, is a 1960 Fender Precision bass guitar which was used by Jonny Greenwood on the album.

Both the guitar and the pad will be auctioned on February 23 at Omega Auctions in their Music Memorabilia sale.

This also comes after a demo which featured unheard tracks from when Radiohead were known as On A Friday was sold for £7,600 last month.

The band’s guitarist, Ed O’Brien said a few months ago that a new album will happen.

Guess Which Actor Is Guest Of Honour At St Patrick’s Festival!