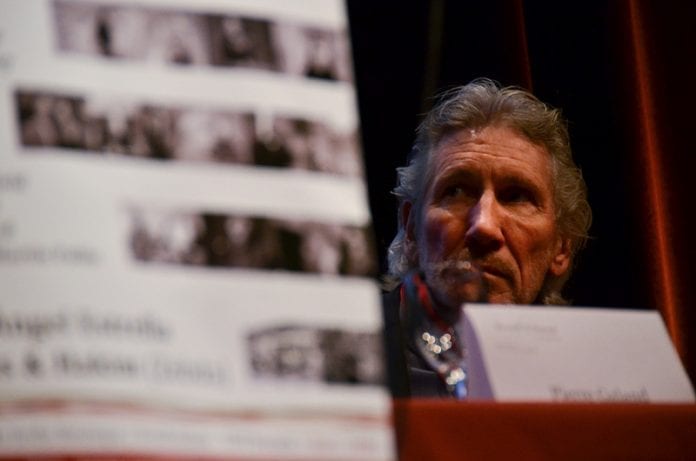 Roger Waters told Agence France-Presse (AFP), that he would consider playing The Wall in protest at the US Mexico border. The co –founder of rock group Pink Floyd, opened up about his views on Trumps “wall” at a recent press conference, saying musicians need to speak out.

The 73 year old bassist said, “Music is a legitimate place to express protest, musicians have an absolute right, a duty, to open their mouths to speak out.”

Drummer Nick Mason and bassist Roger Waters of the psychedelic- rock group, Pink Floyd were speaking at a rare public appearance together, at a press conference ahead of the V&A Pink Floyd exhibition.

The London Victoria and Albert Museum will feature a collection of 350 artefacts including letters, sketches and handwritten lyrics belonging to Pink Floyd. Entitled Pink Floyd, Their Mortal Remains, it celebrates the band’s 50 year career. The exhibit will start on May 31 and will last until Oct. 1.

The exhibition coincides with the news that Pink Floyd’s The Early Years 1965-1972 hefty musical archive boxset is to be split into six individual volumes, in March.

Pink Floyd was formed in 1965 by four Cambridge students. The group sold more than 200 million albums around the world throughout its 50 year musical career. The Wall, released in 1979, is often considered one of the best music albums of all time.

The Wall wasn’t original written with a political agenda but following the band’s performance of it in 1990, in Berlin; eight months after the fall for the Berlin Wall, it took on a new meaning.

American President, Donald Trump infamously promised during his campaign that a wall would be built between the U.S and Mexico border to stop illegal immigrants.

On Thursday, Rogers was asked whether he would consider performing The Wall post-Trump, on the Mexico and US border. “I’ve always said I’d do it again if they ever figure out what to do about Israel and Palestine and get rid of that appalling security barrier,” he replied.

“If there was a resolution and we could realise there is no ‘us and them’ and that we’re all human beings and we all need to figure out how to live together because at the moment … as an act of celebration, if that moved towards a humane way of organising ourselves, I would be only too happy to perform that concert in some place that was significant geographically.

“If that happened to be the border between the United States and Mexico then yeah absolutely.”