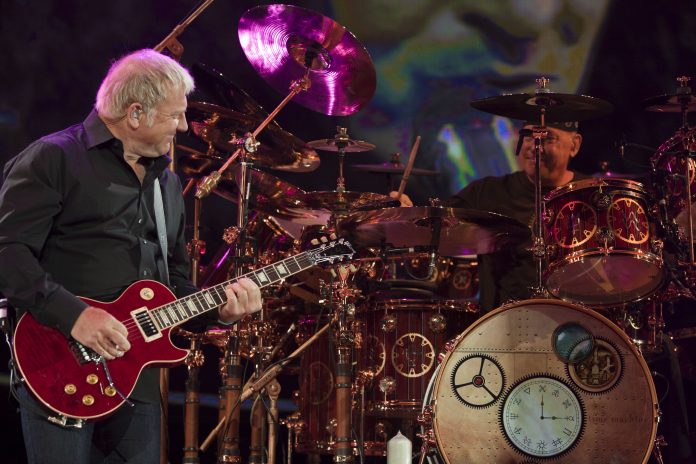 Rush co-founder Alex Lifeson previewed his new band, Envy Of None, with their debut single ‘Liar’. The track will feature on the band’s self-titled debut album set to drop on April 8th.

Lifeson is joined by bassist Any Curran (Coney Hatch), and singer-songwriter Maiah Wynna on the 11-track album produced by Alfio Annibalini. Straying from Rush’s original heavy/prog-rock sound, Lifeson claims that the new project was heavily influenced by Wynne’s songwriting talents.

“Maiah became my muse,” said Lifeson in a press release. “She was able to bring this whole new ethereal thing through her sense of melody on tracks like ‘Liar’ and ‘Look Inside’… I’ve never had that kind of inspiration working with another musician. When we say she’s special, it’s because she’s really f*cking special!”

In addition to ‘Liar’ Envy Of None’s album will also contain two tracks previously released by Lifeson as instrumentals in promotion of his Epiphany Les Paul signature model guitar. The tracks, titled ‘Kabul Blues’ and ‘Spy House’ serve in part as tributes to the longtime Rush drummer Neil Peart, who passed away on January 10th, 2020.

“I visited Neil when he was ill,” Lifeson explained in the press release. “I was on his balcony watching the sunset and found inspiration. There’s a finality about a sunset that kinda stayed with me throughout the whole process. It had meaning. It was the perfect mood to decompress after all these different textures… a nice way to close the book.”

“I can’t tell you how nervous and excited I am,” said Wynne in an Instagram post Wednesday. “The whole record is very eclectic and has such a huge variety of sounds and dimension. All I can say is I know that everyone will find a song they love on this record.”