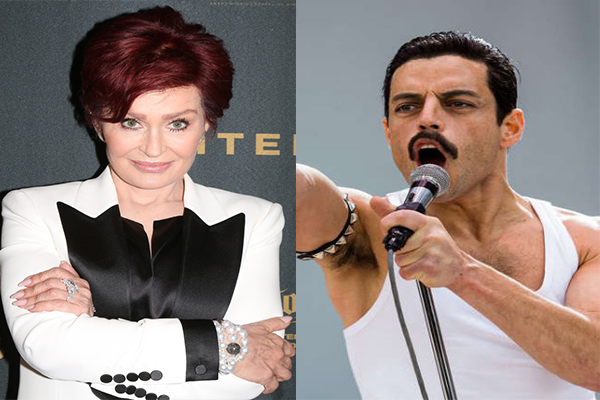 Sharon Osbourne has admitted that she is not able to watch the hit Queen biopic “Bohemian Rhapsody” and has raised questions about the accuracy of the portrayal of the band in the film.

Sharon who is married to Ozzy Osbourne and managed Black Sabbath, brought attention to herself in relation to the authenticity of the film when asked about other management credits, of which she had a connection to Queen .

According to antimusic, when questioned about her relationship and role as manager of the band, she is quoted by as saying:

“Oh my gawd. Freddy Mercury [sic] and his girlfriend (Mary Austin) were big friends of mine, and Freddy hated their manager (Norman Sheffield of Trident Recording, Publishing and Management).

She said at the time, her family and friends were thrilled for her but that was it, she did none of the footwork, Queen basically came to her.”

She recalled it started at one of her Christmas parties when John Reid a friend of hers was there, “Freddy and John Reid then met, and the rest is history.”

She agreed when questioned, that Freddy Mercury was the best performer of them all:

And he was just electric onstage. You couldn’t compete with Freddy. He played every instrument in the world. And that was it. Go on.”

When asked about the biopic “Bohemian Rhapsody” she said that she didn’t like it and just couldn’t watch it.

She seemed to accept the interviewer’s argument about some of the criticism that the movie had received. Sharon felt that the filmmakers had distorted some of the truth in order to give the movie a better storyline.

Sharon went on to say, “But please don’t give me the sh*t in that movie about Brian (May) doing this, and Brian doing that. Brian did what Freddy told him to do, and that’s it.

She agreed that the focus of the movie was just on Freddy and very little attention was given to either the drummer Roger Taylor or the bassist John Deacon.

However, now both have reached their late 60s, and are finally getting the credit they always wanted but never received because they were both always upstaged by Freddy.

“As you say, you watched Queen you didn’t give a sh*t about anybody else. You were drawn to Freddy. And who did anyone want to write about? Nobody but Freddy. So there were these frustrated f*** musos that sat at home going, ‘We hate Freddy. We hate Freddy.’ And that was it.”

Jason Bonham Says Jimmy Page Gave Him Cocaine When He Was...