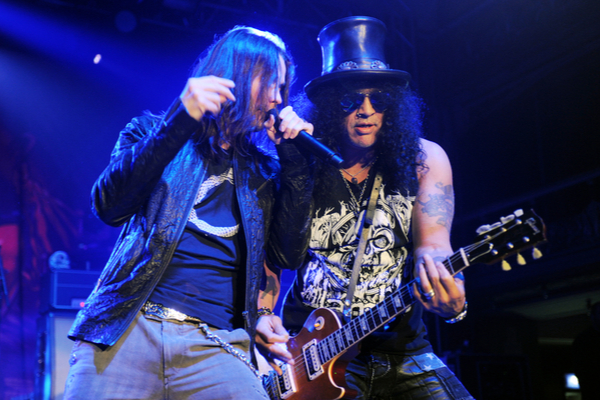 Ahead of the release of their new album 4 in February, Slash’s band Myles Kennedy and the Conspirators have released their new single,The River Is Rising.

This album will arrive via Snakepit Records/Gibson Records on February 11. It is also a follow up to their 2018 album “Living The Dream”.

Earlier this week, a 33 second teaser clip was also released, giving us a sneak preview.

Slash can be heard saying,  “This was the first time that we actually did all the guitars, bass and drums live at the same time, and kept all those tracks. And we also did the vocals live as well. So, the record just sounds like the band playing the songs that we came in with, but it’s us playing in the moment. And that’s what we were going for”.

Slash on the “A live record”

On the record itself, Myles Kennedy had this to say.

“This is pretty much a live record, from my stand point”. Adding,“You’re just trying to kind of document where you are at that point in life, and do it in an authentic way”.

“It’s us playing in the moment”, Slash added. “And that’s what we were going for”.

“It’s an honour to be the first release on the new Gibson Records”, Slash contined.

“It’s a zenith in our partnership for sure and having worked so closely with Gibson for so long, I know they will be a label that genuinely supports their artists creatively. Not just me, but all the artists they choose to work with. It’s perfect”.

Check out the single here.

The tracklist for this album is as follows.

4 – the new album by Slash featuring Myles Kennedy & The Conspirators. Out everywhere 2.11.22.