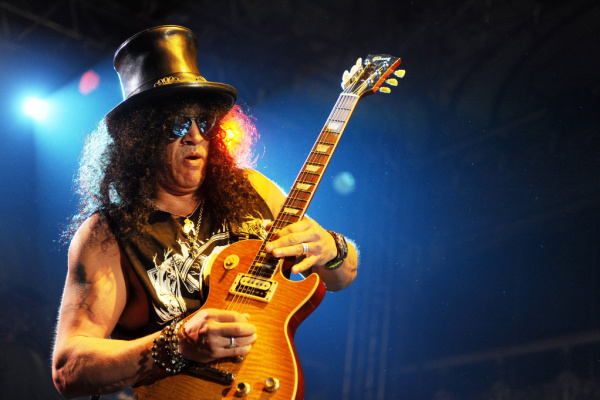 Slash has revealed that Guns N’Roses still have “a couple of epic” songs to release.

Slash made these comments during a recent interview, where he spoke about the band’s upcoming plans. Such plans include touring and releasing new music.

The guitarist made similar remarks earlier this year, where he stated that last year’s tracks ‘Hard Skool’ and ‘Absurd’ would not be the only material released by the band.

“There is new material coming — everybody’s always asking”, he said back in February. “I would imagine that there will be one or two songs that come out around the time that we hit the road in June”.

‘Absurd’ and ‘Hard Skool’ also saw Slash, collaborate with bandmates Axl Rose and Duff McKagan. This is the first time the trio worked together since they covered the Rolling Stones track ‘Sympathy For The Devil’ in 1994.

These tracks also feature freshly recorded tracks from McKagan and Slash. They also date back to Chinese Democracy sessions.

Slash also noted that these songs “don’t have the same kind of amount of history, ’cause I know ‘Hard Skool’… goes way back. But there’s a couple of epic ones coming out, so I’m excited about that”.

Since then, Slash has said that he hopes to make a new album “sooner than later”.

“I want to go in and cut a whole brand new record at some point, probably sooner than later”, he said.

“But other than that, we have stuff [that’s still] got to come out. So that’s gonna be coming out piecemeal over the next… few months or something like that. So that’s basically it. We have one more tour left to do next summer, and then that’ll free us up to be able to go in and work on a new record”.

Elaborating further, Slash also added that himself and Guns N’Roses reworked several tracks during the pandemic.

“There’s a handful of those songs that we absolutely fixed up and did when we were in lockdown”, Slash explained.

Guns N’Roses are to also release a Use Your Illusion box set on November 11. This includes full recordings from their performances at the Ritz Theatre in New York in May 1991.

They will also include recordings from the Thomas and Mack Center in Vegas in January 1992. It will also feature a Live in New York concert film from Blu ray.

The band will also embark on a series of shows across Asia, Mexico and Austrailia/New Zealand. More info here.