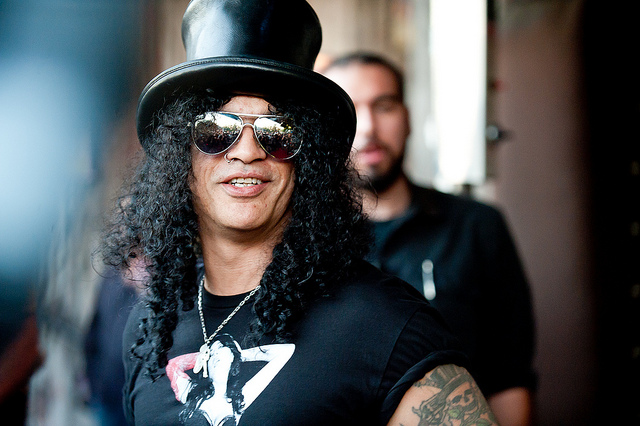 Slash took a break from his monumental Guns N’ Roses ‘Not In A Lifetime Tour’ to surprise the children of Broadway musical ‘School Of Rock’. During a rehearsal of ‘Sweet Child O’ Mine’ Slash surprised the young cast as he emerged from the side of the stage.

Lead singer Bobbi MacKenzie, who plays Tomika in the musical didn’t appear to realise Slash was there until the song had ended. Once the shock had been digested the cast also played ‘Paradise City’ alongside Slash. Speaking to Rolling Stone about the occasion Slash said, “It was really cool to meet such an enthusiastic and talented bunch of young rock and rollers…They were great kids as well as players”.

Rolling Stone also caught the jam session on camera, click here to check it out.

Fleetwood Mac’s Stevie Nicks, whose music features throughout the musical also paid the cast a visit. She even joined them on stage one night to perform a rendition of ‘Rhiannon’. Speaking to Rolling Stone she said it was her Broadway debut, “It was like being somewhere between 8 and 13 again … I can’t wait to send a tape of this to Lindsey and my other guitar player, Waddy, because they’re going to die. They’re not going to believe it. They’re so good”.

School Of Rock is based on Richard Linklater’s 2003 film starring Jack Black. The musical adaption is complete with music from Andrew Lloyd Weber and an expanded book by Julian Fellowes.