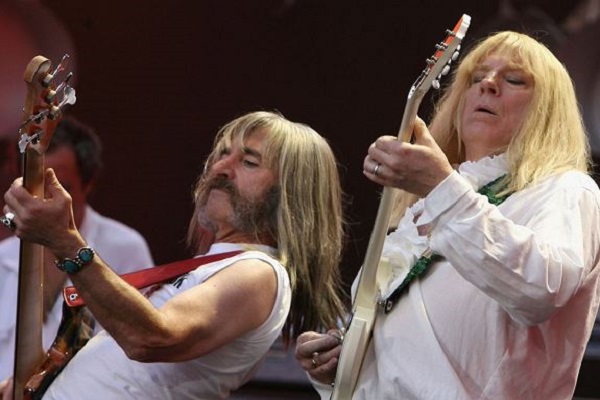 In a recent interview with Billboard magazine, the legendary joke rock band Spinal Tap have suggested that Guns and Roses wrecked their Wembley appearance back in 1992.

The event was a tribute to the life of Queen frontman, Freddie Mercury, who had passed away the previous year.

The actors who play the rockers Hubbins, Tufnel and Smalls maintain that their performance at the Freddie Mercury Tribute event was sabotaged by a member of Guns N’ Roses but they wouldn’t name the culprit.

Sharing the stage with GNR, Metallica, Def Leppard and a whole host more, the Tap performed their track “The Majesty of Rock” after entering the arena in grandiose style.

Guitarist Tufnel told the crowd: “In [Mercury’s] honor we would like to cut our set short tonight by about 35 songs,”. While Smalls the bassist, added, “We believe Freddie would have wanted it this way.”

Speaking to Billboard, Guest aka Tufnel was asked about the rumour that his guitar wasn’t actually plugged in as the band performed:

“It was plugged in, but there was a little of mischief there because someone had sabotaged [my rig]. It lasted a long time before they had to switch me to another amp. … The bad news was once they plugged me into another thing, I had none of my effects. So it was kind of sad.”

Frontman Hubbins said: “The theory I heard was that somebody on Guns N’ Roses [did it] as a gag,”

UCR reports that Derek Smalls aka Shearer, claimed that he’d “heard a specific name” but that he wouldn’t dare repeat it!

The band is getting back together at #Tribeca2019! We’re bringing the 35th anniversary celebration of THIS IS SPINAL TAP to the @BeaconTheatre with @RobReiner, Christopher Guest, @MJMcKean, and @TheHarryShearer in attendance. Guarantee yourself a seat now: https://t.co/1BICnkH49U pic.twitter.com/wZ0eDuUKIm