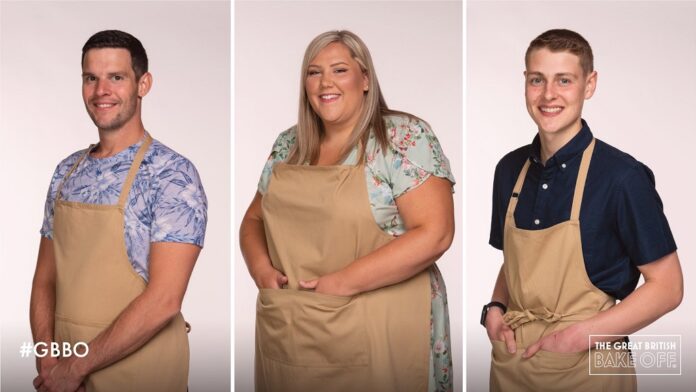 Turn away now if you have it recorded but haven’t watched it yet. Everyone can heave a sigh of relief – it wasn’t Laura. Tensions were high last night as Channel 4’s Great British Bake Off quickly came down to a two-horse race. Laura Adlington rapidly put herself out of contention altogether when she had a couple of epic fails in the first two tests. Those custard slices were all over the gaff.

Laura, lovely, but already suffering from weakest link syndrome as she entered the final, admitted, as the final judging commenced, that the race for the top spot was now between student Peter Sawkins and security guard Dave Friday.

The latter had been seen as the contestant who made the greatest improvement during the weeks of confinement in Bake Off Ground Zero, while 20-year-old Scottish accounting and finance student Sawkins has consistently produced lovely looking cakes that pleased the judges’ tastebuds throughout the series.

Sadly we must say farewell for the last time this series of Bake Off. We hope we’ve brought you some sunshine every Tuesday in recent weeks during what has been a very tough year. Thanks so much for all your lovely tweets. Take care of yourselves and each other please. 😘 #GBBO pic.twitter.com/eLUn6wVA3B

31-year-old digital manager, Laura was upset and “embarrassed” as she served up her custard slices. They looked like a dog’s dinner and judges Prue Leith and Paul Hollywood were sympathetic but placed Laura firmly at the bottom of the pecking order. Peter wowed with his Scottish inspired custard slices flavoured with whiskey and raspberries, coming out on top in the test.

However, it was all change in the technical challenge. Who can make their own walnut whirls? Crazy, right? Well, it seems that proper bakers can. Prue Leith’s version looked amazing. Coffee flavoured ganache in the middle, surrounded by fluffy, piped marshmallow and covered in tempered chocolate – those yokes looked like little lumps of magic. The contestants’ efforts didn’t fare as well as Prue’s drops of perfection but still, they were making their very own walnut whips!

Dave took the lead in this most difficult of technical challenges and even managed to get his tempered chocolate to set nicely in the 34-degree heat. So, going into the showstopper challenge, Laura was out of the running as the two lads got down to business. Charged with completing a layer cake that showed at least 3 of the contestants’ skills, they had 4.5 hours of sweaty activity in a tent to look forward to. [Sounds like Glastonbury but isn’t].

Laura redeemed herself with her showstopper with Prue telling her that “there’s nothing wrong with your baking”. Dave showed courage by trying out cakes that he’d had problems with in previous episodes, previous weeks; brownies, chocolate babka and choux buns. Last night, the choux buns let him down a bit but the overall effect was stunning. Peter offered up a Victoria sandwich, choux buns and Battenberg biscuit dessert which had a couple of problems but was called a “good effort” by Prue.

At final judging, Prue and Paul said that it was as close to a draw as it could possibly be. But, in the end, watched by the entire Bake Off crew, Peter Sawkins, was crowned as the youngest ever Bake Off champion. A worthy and likeable winner (I was on team Lottie), Peter lives with his college friends in Edinburgh. He’s been huge fan of The Great British Bake Off for years and it was the programme that inspired him to start baking in the first place.