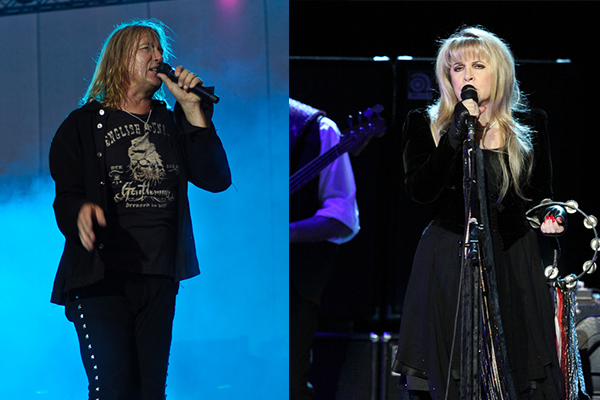 Both Def Leppard and Stevie Nicks have secured the fan vote for induction into the Rock & Roll Hall of Fame in 2019. According to Ultimate Classic Rock, there are just five days to go until the public ballot shuts and it’s looking good for Nicks and Def Leppard.

Over 3 million votes have been made since the polls opened in back October. Early on, Joe Elliot and his rockers, as well as the Fleetwood Mac singer, took the lead from the 13 other contenders.

Rage Against the Machine, Devo, Roxy Music, Radiohead, Janet Jackson, John Prine and LL Cool J all lie somewhere in between 100,000 and 200,000 votes, lower down, Rufus featuring Chaka Khan, Kraftwerk and MC5 has secured less than 100,000 votes each.

It’s possible for fans to vote once a day every day right up until 11.59PM ET on Dec. 9th. The top five acts will have a fan vote included with the votes counted by official delegates of the Rock Hall Of Fame. The panel consists of performers, writers and executives. Ever since the fan vote started in 2012, all the acts who’ve bagged the accolade have gone on to be inducted into the pantheon.

Def Leppard frontman, Joe Elliott talked to Loudwire in a recent interview regarding Stevie Nicks that,

“from a commercial point of view, [has] had an astonishingly long career in and out of Fleetwood Mac. You can’t deny that she’s earned the nomination. And for what’s it’s worth, Kraftwerk are so influential on anything from David Bowie to Depeche Mode to Nine Inch Nails – all those bands. … I think it’s good to look for bands that most of us had never heard of that influenced people we have heard of.”

Lemmy Kilmister’s Ashes Placed In Bullet Casings And Given To Friends!