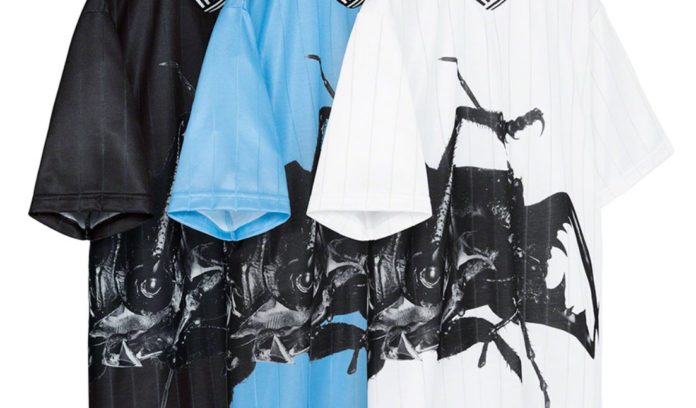 Coming out tomorrow (June 17), the line will include button downs, shorts and football jerseys (see photo). Each of these items is available in three colours with the designs inspired from the beetle artwork design from the band’s 1998 album “Mezzanine”.

Check out the shorts for yourselves here.

Massive Attack are the latest in a string of artist to have lend their iconography to the clothing brand. Last year, Supreme released a fashion line which featured art from the late Daniel Johnston. Hoodies and shirts were among the items released which featured artwork from the cult-flo songwriter.

Over the years, Supreme have also released clothing lines featuring the likes of The Smiths and The Velvet Underground.

Back in 2015, Supreme also sold T-shirts which featured a photo of singer Neil Young wearing a Supreme t-shirt.

Last year, the streetwear brand also teamed up My Bloody Valentine. Pieces released included artwork from the band’s 1991 album “Loveless”, their EP “Gilder” which was released a year earlier, and their 1998 record “Feed Me With Your Kiss”.

Last year, Massive Attack shared a film which talks about the climate crisis and how touring has affected climate change.

The band were trying to raise awareness regarding the issue.

“As well as the havoc the pandemic reaps across our lives, there’s also the opportunity within that enforced hiatus to reflect and to change”, said their frontman Robert Del Naja.

“We came to the realisation that our industry couldn’t, or wouldn’t, move fast enough for live music to play its part in rapid decarbonisation”, he added. “So we opted to design that change ourselves, to put together the identities and circumstances to push through and show that it’s possible”.

Last month, the band confirmed that they are to perform for next year’s iteration of Primeavera Festival, featuring artists like Nick Cave, Tame Impala and Lorde.

Listen: The Beatles Share Unheard Acoustic Version Of ‘While My Guitar...

Ozzy Osbourne Was Not Always Keen On Touring With Black Sabbath...