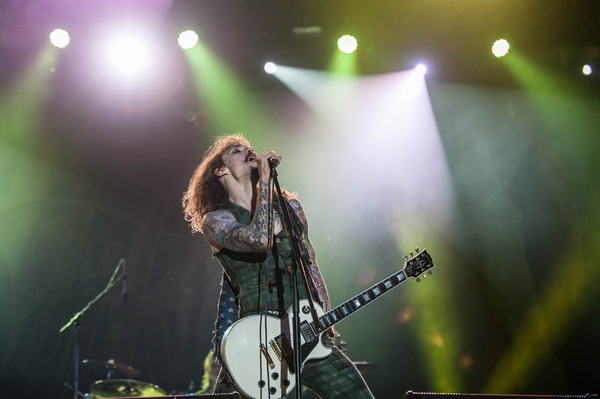 The Darkness have launched a beer named after their Christmas song Christmas Time (Don’t Let the Bells End).

The beer is brewed by London based craft brewery Signature Brew. It comes packaged in a limited edition box with the title “Pub in a Box, Bells End Edition.”

Along with four cans of Bells End Bitter, the box also contains one can of Roadie All-Night IPA, two cans of Studio Lager, one can of Backstage IPA, a limited edition glass, beer mat, art print, snacks, a pub quiz and a Spotify playlist.

The box will set you back £30 and can be ordered from Signature Brew’s website signaturebrew.co.uk.

The Darkness’ Bells End Extra Seasonal Bitter, 5.2%: “This warming, winter beer was brewed with our friends The Darkness and sees English hops unleash a mouth-watering bitterness to carry you through the season.”

Roadie All-Night IPA, 4.3%: “This refreshing beer is loaded with citrus notes, fit for road crews the world over. Unsung heroes, we salute you.”

Studio Lager, 4.0%: “This beer is clean and crisp with unmistakable floral hits and a deliciously bitter finish. All the notes of an instant classic.”

Backstage IPA, 5.6%: “Backstage IPA gives you an access-all-areas experience like no other, welcoming you into an unforgettable world of tropical flavour.”

“The tasting session for Bells End went well, it was a big night, and we tried every ale that we could think of,” said The Darkness’s guitarist Dale Hawkins. “We wanted a beer that’s punchy and drinkable at the same time. Signature Brew really know their stuff and captured exactly what we were after. Bells End has got a bit of oomph to it but it’s something you can drink in the run up to Christmas and throughout the whole season. It’s a very wintery beer, it’s perfect and we can’t wait for everyone to try it.”

Rejoice! Bells End is BACK! 🔔 Our mouthwatering, limited edition beer with our friends at @SignatureBrew returns just in time for Christmas 🎅: https://t.co/Q3ngmdX2Uv pic.twitter.com/PhGxg3dTBm

The Darkness are currently touring the UK. In his distinctive manner, Hawkins spoke about returning to the road.

“The time has come, the walrus said…to put your fookin pants on your head and rock like Satan is eating your private parts with a pointy fork,” he said. “Yes, we, The Darkness, are the fuck back on tour, praise Satan’s better half…come and party with us like it’s the last orders at the last chance saloon.”

Sounds like Hawkins has been sampling a little too much of his own product.

The new album “rocks harder than anything we’ve done before,” according to Hawkins.