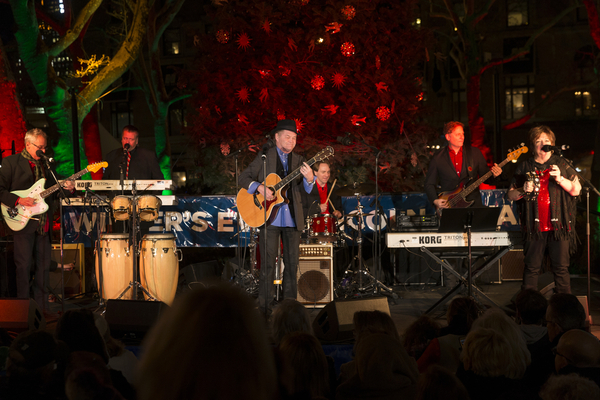 The Monkees have returned to the road for what has been billed as their farewell tour.

Micky Dolenz and Michael Nesmith, the surviving members of The Monkees, are joined on tour by a band featuring Nesmith’s son Christian on guitar and vocals, and Dolenz’s sister Gemma “Coco” Marie on backing vocals.

The Monkees reassembled for the touring circuit back in 2011 with a lineup of Davy Jones, Micky Dolenz and Peter Tork. When Jones passed away from a heart attack in 2012, Michael Nesmith rejoined the band, though he declined to take part in the band’s 2016 50th anniversary tour. When Peter Tork died from cancer in 2019, Dolenz and Nesmith were left to carry on.

Said to be their last ever outing, The Monkees’ tour kicked off last weekend with shows in the Pacific NorthWest cities of Spokane, Seattle and Portland.

While featuring all the expected hits, the show also saw The Monkees give live debuts to While I Cry and Love Is Only Sleeping from their 1967 album Pisces, Aquarius, Capricorn & Jones Ltd. Along with the classics, some songs from their 2016 comeback album Good Times! Were given an outing.

The tour was originally scheduled for last year but was postponed due to the pandemic.

Speaking to Rolling Stone earlier this year, Dolenz admitted feeling the effects of life on the road.

“I’m not looking forward to the touring and the hotels and travel,” he confessed. “I’m like a fine wine. I don’t travel well. I’m good when I’m lying on my side in a cellar in the dark. But the shows, of course, especially these ones with Nez, are just wonderful. The audience reaction has always been so phenomenal. And that helps, to be honest.”

The tour concludes at Los Angeles on November 14th, but Dolenz says he’ll continue to represent The Monkees in his solo performances.

“I will always be Micky, the wacky drummer on that classic old television show, just like Leonard Nimoy was always Mr. Spock,” he assured fans. “You got typecast from these things. Most people spend the years trying to be successful enough to be typecast, and then they fight it the rest of their lives. Well, I never fought it.”

You can watch fan-shot footage of The Monkees performing Circle Sky and Day Dream Believer from their Seattle show below.