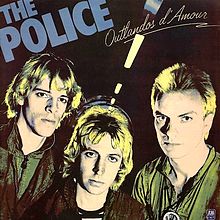 Outlandos d’Amour is the debut album by The Police, released in 1978. The album, while at times incorporating reggae, pop, and other elements of what would eventually become the definitive sound of the band, is dominated by punk influences. It starts off with “Next To You”, a punk number with a slide guitar solo in the middle. The reggae-tinged “So Lonely” follows. “Roxanne”, about a prostitute, was written by Sting after visiting a red-light district in Paris and is one of The Police’s best-known songs. It is followed by “Hole in My Life”, another reggae-tinged song, and “Peanuts”, a Sting–Stewart Copeland collaboration which blends punk aggression with a decidedly humorous tone. “Can’t Stand Losing You” and the high-tempo “Truth Hits Everybody” begin side two of the original LP. “Be My Girl—Sally” is a medley of a half-finished song by Sting and an Andy Summers poem about a blowup doll. This leads into the semi-instrumental closer, “Masoko Tanga”, the only song on the album to not become a staple of the Police’s live performances.

Two other songs from these sessions were released as b-sides: “Dead End Job” credited to the entire band on the flip of “Can’t Stand Losing You,” and “No Time This Time” by Sting on the back of “So Lonely,” later issued on Reggatta de Blanc.

Punk band No Use for a Name covered the song “Truth Hits Everybody” on their 1990 debut album, Incognito. The pop-punk band Motion City Soundtrack also covered the same song for a Police covers album. “Next to You” was later packaged in Rock Band. “Truth Hits Everybody”, “Roxanne”, “Can’t Stand Losing You”, and “So Lonely” were all released as downloadable content for the Rock Band series.

With a budget of only £1,500 borrowed from Stewart Copeland’s brother Miles Copeland III, the album was recorded at Surrey Sound in an intermittent fashion over six months, with the band jumping in whenever the studio had free time or another band’s sessions were canceled. Miles Copeland had promised to pay Surrey Sound £2,000 upon completion of the recording, but didn’t give them the full amount until much later.

Miles Copeland occasionally dropped into the studio during recordings, and reacted to what he heard from the group with vehement derision. However, upon hearing “Roxanne” he had the opposite reaction and took the recording to A&M Records the following day, where he persuaded them to release it as a one-off single. Though the single failed to chart, A&M agreed to give the band a second chance with “Can’t Stand Losing You”. At first, A&M proposed that they create an improved mix of the song, but after five attempts admitted that they could not improve upon the band’s mix and released the original mix for the single. When it became the band’s first hit, the record label quickly approved the release of the by-then finished album.

Miles Copeland III originally wanted to name the album Police Brutality. However, after hearing “Roxanne” and then envisioning a more romantic image for the band, he proposed Outlandos d’Amour instead. This title was a loose French translation of “Outlaws of Love”, with the first word being a combination of the words “outlaws” and “commandos”, and “d’Amour” meaning “of love”.

All songs written and composed by Sting except where noted.

You Can Listen To The Police’s ‘Synchronicity’ In Full From Midnight...