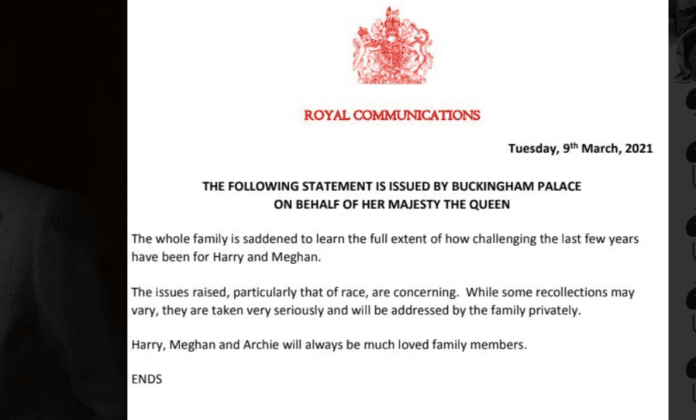 Queen Elizabeth has said in a statement that she is “saddened” to learn of the claims made by Prince Harry and Meghan when interviewed by Oprah Winfrey this week.

Meghan Markle claimed that before her son Archie was born, concerns were raised regarding how dark Archie’s skin would be.

This interview which included revelations of suicidal thoughts, an heir to the throne trapped by tradition and a racist relative, was the most eye-opening Royal interview since Harry’s late mother Diana’s in 1995.

Speaking to Oprah, Meghan said that she was also denied help for a mental health crisis. “I … just didn’t want to be alive anymore,” Meghan had revealed to Oprah.

Harry also said that his father Charles and brother William were “trapped” by the conventions of the monarchy.

“They don’t get to leave. And I have huge compassion for that”, Harry said to Oprah.

“Saddened to learn the full extent”

Following this interview, Buckingham Palace released this statement, “The whole family is saddened to learn the full extent of how challenging the last few years have been for Harry and Meghan”.

“The issues raised”, they continued, “particularly that of race, are concerning.  Whilst some recollections may vary, they are taken very seriously and will be addressed by the family privately”.

The Queen also insisted, “Harry, Meghan and Archie will always be much loved family members”.

“Happy to die on”

This also comes after Piers Morgan said he stands by his comments regarding Meghan Markle, having left Good Morning Britain.

Morgan said this, “On Monday, I said I didn’t believe Meghan Markle in her Oprah interview. I’ve had time to reflect on this opinion, and I still don’t”.

He also added, “If you did, OK. Freedom of speech is a hill I’m happy to die on. Thanks for all the love, and hate. I’m off to spend more time with my opinions”.