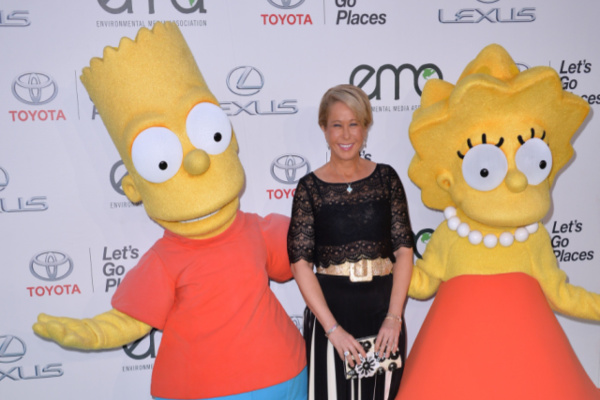 Smith who provides the voice for many characters on the cartoon comedy including Lisa Simpson, met Grice while on a promotional tour at Springfield, Oregon.

Grice was the local police detective who was assigned to protect Smith.

She also revealed that that Springfield had decided to honour the famous tv show of the same name, with a mural for the show’s 25th anniversary.

Matt Groening who created The Simpsons, is also from Oregon.

“didn’t really want to do it”

Smith revealed this delightful piece of news regarding her recent nuptuals, during an interview with the Hollywood Reporter.

However, the couple nearly did not meet, as Smith had initially turned down the offer of travelling to Springfield.

She was asked to travel to the unveiling of the mural after the original guest Al Jean (Simpsons showrunner) was unable to attentd.

“The joke is that I really will do anything for my show but I didn’t really want to do it”, Smith said. “They came back and said, ‘Oh, please? Somebody has to go'”.

Smith “eventually” agreed to go, and met Grice at the airport. Grice had agreed to take on the role, as he wanted his married colleagues to spend the weekend with their families.

“The captain said it was Yeardley Smith”, Grice said. “Her name rang a bell but it wasn’t until later that morning that I got a printout with her photo”.

“I saw it and knew exactly who she was because I remember her from The Legend of Billie Jean and Maximum Overdrive. I didn’t know that she happened to be the voice of Lisa Simpson”.

On meeting Grice, Smith added “He was respectful without being fawning”.

“He was not overly impressed by me and I really admired his sense of self-assurance.

“It was about a 23-minute ride from the airport to the hotel and during that time, I found out if he was married, divorced, had any children or a girlfriend. The answer was no, no, no, no”.

Yeardley Smith later returned to LA. She had given Grice her phone number, under the illusion he would send a photo of his visit to Signapore.

Calling herself “pretty smooth”, Smith also added, “A week later, I’m in Los Angeles, and Dan texted to say, ‘I really wish you’d asked me to dinner’, which was so sweet. We kept texting and then we started to talk on the phone. Because I’m a person who leaps and then looks, I said, ‘Hey, why don’t you come down to Los Angeles?’ for [The Simpsons] dates at the Hollywood Bowl”.

“one of the biggest hearts”

Reflecting on the first time they met, Dan Grice stated that Yeardley had “one of the biggest smiles” he had even seen.

Grice also spoke about Yeardley Smith’s “smile”, referring to it in their wedding vows.

“That first drive from the airport to her hotel, I remember as she was interrogating me, I looked over at her in the passenger’s seat and she gave me this smile. I mentioned this in our wedding vows, but at that moment, her eyes captured me and I really look back on that as the moment she kind of owned me”.