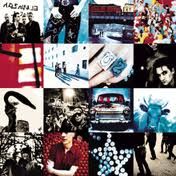 Achtung Baby is the seventh studio album by Irish rock band U2. It was released on the 18th of November 1991. Stung by the criticism of their 1988 release Rattle and Hum, U2 shifted their musical direction to incorporate influences from alternative rock, industrial music, and electronic dance music into their sound. Thematically, the album is darker, more introspective, and at times more flippant than their previous work. Achtung Baby and the subsequent multimedia-intensive Zoo TV Tour were central to the group’s 1990s reinvention, which replaced their earnest public image with a more lighthearted and self-deprecating one.

Seeking inspiration on the eve of German reunification, U2 began recording Achtung Baby at Berlin’s Hansa Studios in October 1990. The sessions were fraught with conflict, as the band argued over their musical direction and the quality of their material. After tensions and slow progress nearly prompted the group to break up, they made a breakthrough with the improvised writing of the song “One”. Morale and productivity improved during subsequent recording sessions in Dublin, where the album was completed in 1991. To confound the public’s expectations of the band and their music, U2 chose the record’s facetious title and colourful multi-image sleeve.

Achtung Baby is one of U2’s most successful records; it received favourable reviews and debuted at number one on the US Billboard 200 Top Albums, while topping the charts in many other countries. Five songs were released as commercial singles, all of which were chart successes, including “One”, “Mysterious Ways”, and “The Fly”. The album has sold 18 million copies worldwide and won a Grammy Award in 1993 for Best Rock Performance by a Duo or Group with Vocal. Since its release, writers and music critics have regularly cited Achtung Baby in polls of the greatest rock albums. The record was reissued in October 2011 to commemorate the 20th anniversary of its original release.

U2 hired Daniel Lanois and Brian Eno to produce the album, based on the duo’s prior work with the band on The Unforgettable Fire and The Joshua Tree. Lanois was principal producer, with Mark “Flood” Ellis as engineer. Eno took on an assisting role, working with the group in the studio for a week at a time to review their songs before leaving for a month or two. Eno said his role was “to come in and erase anything that sounded too much like U2”. By distancing himself from the work, he believed he provided the band with a fresh perspective on their material each time he rejoined them.

U2 are credited with composing the music for all of Achtung Baby’s tracks, despite periods of separated songwriting. They wrote the music primarily through jam sessions, a common practice for them. The album represents a deviation from the sound of their past work; the songs are less anthemic in nature and explore new sonic territory for the group. Their musical style demonstrates a more European aesthetic, introducing influences from alternative rock, industrial music, and electronic dance music. The band referred to the album’s musical departure as “the sound of four men chopping down The Joshua Tree”. Accordingly, the distorted introduction to the opening track “Zoo Station” was intended to make listeners think the record was broken or was mistakenly not the new U2 album.Author Susan Fast said that with the group’s use of technology in the song’s opening, “there can be no mistake that U2 has embraced sound resources new to them”.

All lyrics written by Bono, all music composed by U2.