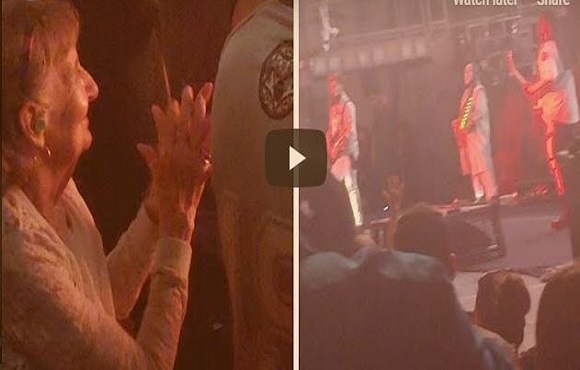 Footage of an elderly lady seemingly enjoying herself a Slipknot show has received thousands of hits and high praise online.

The video was shot on Friday, September 6th while the masked metallers performed a show at New Jersey’s PNC Bank Arts Center. In the viral video, we can see the elderly lady smiling and clapping as the group perform ‘Spit It Out’.

Her focus is clearly on the Iowa rockers whose latest record recently secured a UK no 1. Commenting on the clip shared by Caters TV a poster named Richard Taylor wrote:

“God bless this dear lady. I have never gone to there show because I felt a little to old to get in to it. You go girl,”.

Another poster said: “This lady is awesome. Id rock out with her.” So far the clip on Caters’ YouTube channel has bagged more than 25,000 views.

Meanwhile, the NME reports that another elderly lady made the headlines in July after enjoying herself at a Lewis Capaldi concert on top of a man’s shoulders.

The woman at Glasgow’s TRNSMT Festival was seen having a blast in a clip shared widely on Twitter.

Highlight of @TRNSMTfest during @LewisCapaldi 😂 what a fucking woman 🙌🏻 pic.twitter.com/Y1eYeWFLuw

“That’s my gran,” said one tweeter, while another user said: “Made my day I thought I was the oldest there”.