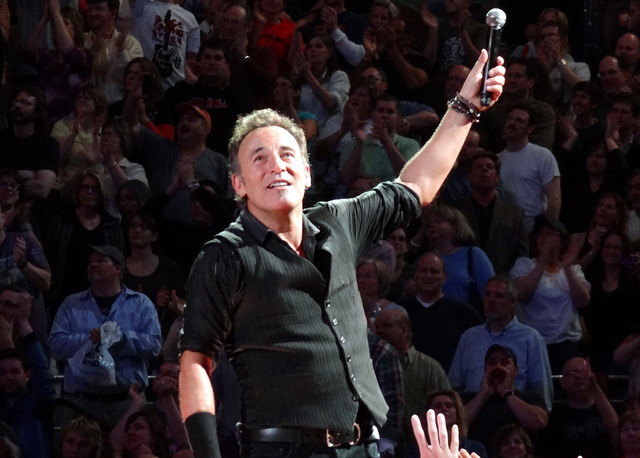 Bruce Springsteen performed a solo set last night at a rally in support of US Presidential nominee, Hillary Clinton.

The Boss is one of several well known figures to have backed the democratic nominee throughout her campaign and yesterday he took one last opportunity to persuade voters before election day today. Springsteen performed at the rally in Pennsylvania, where his set included songs ‘Thunder Road’, ‘Dancing In The Dark’ and ‘Long Walk Home’. You can watch the performance here:

As well as performing, the musician also spoke about his reasons for voting for Clinton. He said, “The choice tomorrow couldn’t be any clearer. Hillary’s candidacy is based on intelligence, experience, preparation and of an actual vision of America where everyone counts,”

Springsteen also spoke about Clinton’s opponent and Republican nominee, Donald Trump, who he has previously referred to as a ‘moron’. Speaking of Trump, he said “This is a man whose vision is limited to little beyond himself, who has the profound lack of decency that would allow him to prioritise his own interests and ego before American democracy itself,”He added,  “Somebody who would be willing to damage our long-cherished and admired system rather than look to himself for the reasons behind his own epic failure. And that’s unforgivable. Tomorrow, those ideas and that campaign is going down.”