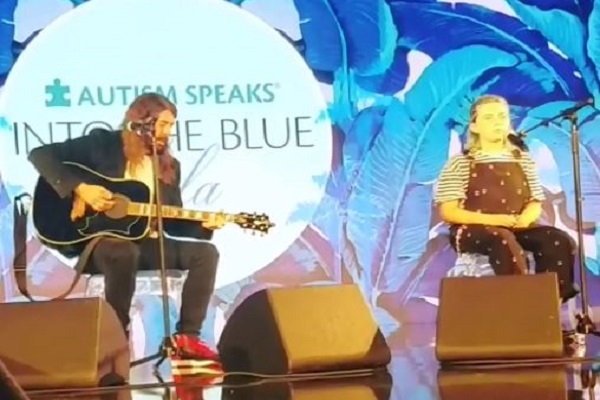 According to Alternative Nation, Dave Grohl joined forces with his daughter Violet to deliver a cover of Adele once again, as well as debuting their own version of a Billie Eilish track. The video of the sweet performance is below.

Last Thursday night, the Foo Fighters frontman was the headliner at the ‘‘Autism Speaks: Into the Blue’ gala in Beverly Hills. After an intimate acoustic version of ‘Everlong’, he was joined by Violet on Adele’s ‘When We Were Young’. That’s after the duo had previously played the duet earlier in the year.

They also threw in a Billie Eilish cover too, with the pair performing ‘Idontwannabeyouanymore’. Posting footage of the performance on Instagram, one fan claimed that Violet had “the voice of a fucking angel”.

Update: Dave Grohl has a daughter, she is adorable, and she has the voice of a f*cking angel. (Also, their super cute rapport will make your heart melt right out of its cold black LA shell.) . . #davegrohl #violetgrohl #adele #billieeilish #foofighters #everlong #autismspeaks #autismawareness #fefffanclub

As well as performing with her dad alone, Violet joined the full line up of the Foo Fighters as a backing singer last summer as well.  “That’s my boo!”, Grohl remarked after introducing Violet to eager fans during a show in Toronto. During another show, he said: “Violet Grohl, you sound amazing!”