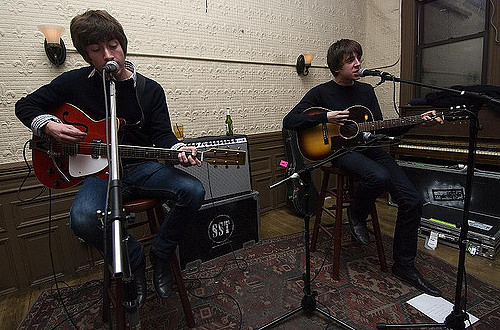 Alex Turner and Miles Kane played their newest single ‘Bad Habits’ which is from their new album Everything You’ve Come To Expect. The album released at the beginning of this month on April 1st.

The Last Shadow Puppets is the side project of Arctic Monkeys frontman Alex Turner. They released their debut album The Age of the Understatement back in 2008.

The band are currently on tour in the US and will be playing at Coachella in California this weekend. They will then play three other dates around California before playing gigs in Mexico and Japan.

The Last Shadow Puppets will be kicking off their Europen tour next month in Dublin with three shows at the Olympia Theatre. They will be playing three consecutive nights at the Olympia on the 25th ,26th and 27th.

You can watch the video of The Last Shadow Puppets performing their new single ‘Bad Habits’ on US television down below.

U2 new song “Invisible” live on the tonight show

Jack White Refutes Rumours That He Is A Heroin Addict