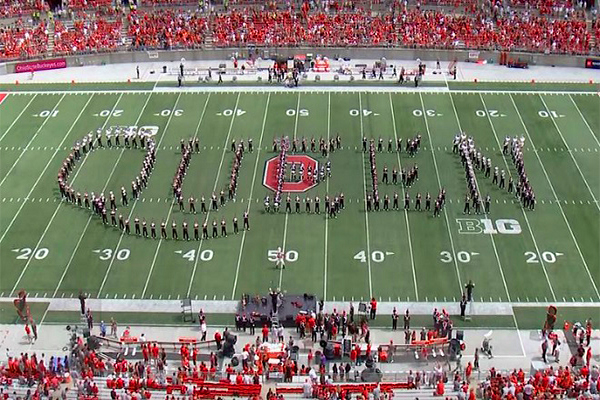 The Ohio State Marching Band performed a selection of Queen songs during the halftime show as the Ohio State Buckeyes were victorious over the Oregon State Beavers on Saturday.

The crowds heard parts of  “We Will Rock You,” “Fat Bottomed Girls,” “Bohemian Rhapsody”, “Crazy Little Thing Called Love” and “Bicycle Race”. The marchers formed the band’s iconic logo, the outline of Freddie Mercury’s hallmark pose as well as other moves. The Ohio Stadium commentator Announced the band as “one of the most successful and popular classic rock bands.”

The special performance was seen by Queen guitarist Brian May who retweeted the clip and said, “This is truly amazing! What an incredible amount of work went into this performance.”

This is truly amazing !!! What an incredible amount of work went into this performance. https://t.co/wIT6YfDj1S.… https://t.co/8WOHmhcmPz

Queen kicked off a 10-show residency in Las Vegas with singer Adam Lambert on the same day. They rocked a set list that just happened to include all the tunes played by the marching band.

During the Las Vegas residency, Lambert addressed the absence of Queen’s legendary singer. “Some of you might be like, ‘This is great, but he’s no Freddie. No shit! There can be only one. … Do you love Freddie? Do you miss Freddie? Me too. I’m exactly the same as you guys. I’m a fan too.”

May tweeted after the show, “Thanks Las Vegas First Nighters!”  “You gave us an amazing reception. Bless ya ! Hurrah ! Tomorrow we rock again.”

After the second concert, May said on social media, “I think we are getting the hang of this! I did some smiling tonight. Yes, the finger ends are sore sore sore … but it was worth it, and I have 2 whole days to heal!”