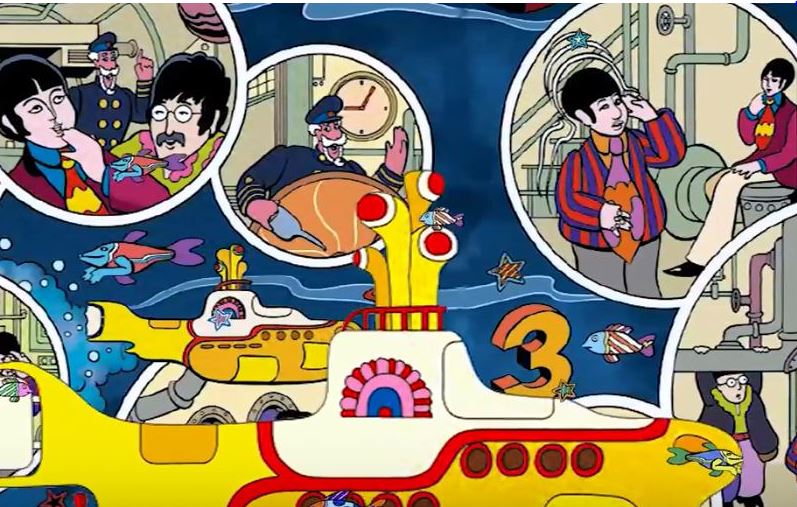 As reported in Nova’s Seriously Addictive Music News, a Yellow Submarine Graphic Novel is on the way. It’s been Fifty years since The Beatles’ animated movie classic, Yellow Submarine, went on general release. Now, Titan Comics has announced it’s prepping a graphic novel interpretation of the psychedelic adventure. A Video trailer for your lovely eyes is below….

In this Apple endorsed version, Bill Morrison who is a Simpsons comic artist re-tells the story of the happy aquatic music loving world, Pepperland. The tuneful paradise is invaded by the conquering, music hating Blue Meanies. The Meanies turn the residents of Pepperland into statues by firing arrows that drop green apples on their heads. They also confine Pepperland’s guardians, Sgt. Pepper’s Lonely Hearts Club Band, to a soundproof globe.

Right before he’s imprisioned, Pepperland’s Lord Mayor sends Old Fred off in the Yellow Submarine to get help in Liverpool. Once there, he enltsts Ringo and his pals, John, Paul and George, to travel back and battle the Meanies using love and music as there powers.

The trailer below presents the story in all of its brightly coloured glory, The Beatles are foppish dandies and the imagery is overflowing with references that will delight fans. The Beatles Yellow Submarine will be released on August. 28th and can be pre-ordered here.

In honour of the 50th Anniversary, Yellow Submarine (1968) is getting a special release across cinemas in North America this July. The famous animation has been given a new 4K digital restoration and a 5.1 stereo surround sound remix.