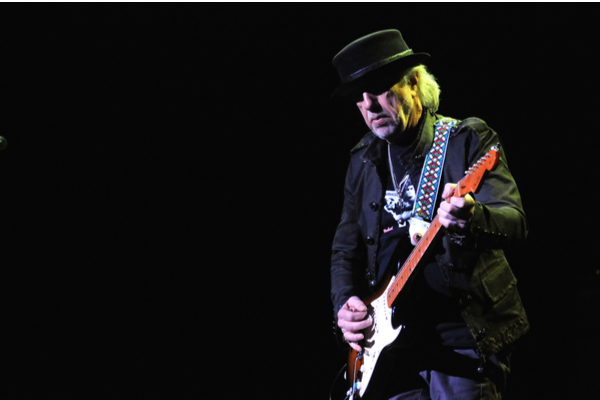 Aerosmith guitarist, Brad Whitford has cast doubt over the band ever getting to perform live together again in a powerful new interview. The 69-year-old rocker has revealed that he is ready to walk away; “I don’t want to die in a hotel room”.

Whitford gave an in-depth interview over the weekend, revealing his readiness “to start a new chapter in my life”, as he does not see the band ever going back on stage again. Speaking on the Joe Bonamassa podcast, Live from Nerdville, Whitford discusses the band’s scheduled European tour, and it does not sound to hopeful.

“They tried to plan one last year, and they’re talking about next year,” Whitford explained. “It’s a pipe dream right now. Nothing’s gonna happen for a long time. Sometimes I’m not sure what my partners are thinking when they think that’s gonna happen”.

However, Whitford said he doubts it will ever happen, and even reveals that he is happy about it. In the episode the guitarist said he has “no problem with it” as he has “always been a home body. Touring was always not very healthy for me. I like being at home. After 50 years of doing that, I’m ready to start a new chapter in my life. I don’t want to die in a hotel room somewhere…”

Raised in the episode is the topic of Brexit, and how it made it harder for bands to get work visas for European dates. Whitford expresses his doubts “about Aerosmith ever really performing again at this stage, because age is becoming a real factor. It is what it is”.

Aerosmith were set to celebrate the band’s 50th anniversary and announced a 14-date European tour in late 2019, with shows in June and July 2020. Due to the coronavirus, the band were forced to postpone their celebrations and move the dates to the summer of ’21. However, the dates were postponed yet again, with Aerosmith’s website now listing those dates as scheduled for 2022.

The band also appeared to confirm that they had been booked to play at next year’s Glastonbury Festival, following their scheduled appearance in 2020. However, the new date was swiftly removed from their website.

Elsewhere in the podcast, Bonamassa and Whitford discuss Aerosmith’s blue-collar appeal, the importance of eye contact at small shows, and the paranoia associated with going on tour with an original 1959 Stratocaster.

The Killers Drop Reimagined Version Of ‘The Getting By’ LP